Ouch… Time sure flies. E.T. the EXTRA-TERRESTRIAL cane out 40 years ago.

I have a distinct memory of seeing E.T. on the June 11 opening night back in 1982. Going to see it was a no-brainer; I was excited to see what the director of three of my favorite films at the time — JAWS, CLOSE ENCOUNTERS OF THE THIRD KIND, and RAIDERS OF THE LOST ARK — would do next. Walking in, I knew almost nothing about the film, other than there would be an alien that comes to earth and has some sort of adventure. At that point in the movie’s marketing roll-out, E.T. himself had been an absolute mystery and no one knew what he looked like. I envisioned something similar to the visitors from CLOSE ENCOUNTERS, and during that first scene of E.T. in which the little critter from another world got left behind in the woods, I remember thinking, “Huh?” It looks so… weird.” The animatronic movement of the newly introduced Spielberg alien felt a bit off as it waddled along, and I had a moment of serious doubt about the film. I also remember the two teen girls in the seats in front of me groaning. “We should’ve picked DAWN OF THE DEAD,” complained one to the other. I wondered too if I had made a mistake. Of course, E.T. and his winning personality soon won over the hearts of every person in the theater that night — including those two girls, who were sobbing loudly by the end when he said his final goodbye to Elliott, played by a young Henry Thomas.

When E.T. celebrated its 30th anniversary, I dug into the video archive vault at the other “ET” where I worked — ENTERTAINMENT TONIGHT — and unearthed some great set visit interviews with Spielberg (sporting a RAIDERS cap) and the kids from 1981, along with footage of him directing scenes at the same time that he was putting the finishing touches on POLTERGEIST. Finding that forgotten footage felt like hitting the jackpot for a film fan like me, because the bulk of that material rarely finds its way to air, and I was allowed to use anything I wanted. Footage like that reveals a less-commonly seen side to Spielberg in his prime, sharing his mindset while juggling the responsibility of making two major films at the same time that would ultimately become pop-culture classics. And in typical Spielberg fashion, he just shrugged it off as something the great directors of Hollywood’s Golden Age would do, like Howard Hawks or Michael Curtiz, and shared his hopes to ramp up production to directing or producing multiple films per year.

“It does not stand for elapsed time, it stands for extra-terrestrial,” joked Spielberg about the film’s title. “It’s a very warm adventure story, and it’s a relationship story; the unusual aspect of this relationship is it’s between a person and a creature, not between two people. … I think it’s probably one of the most exciting experiences I’ve had making a movie up until now.” 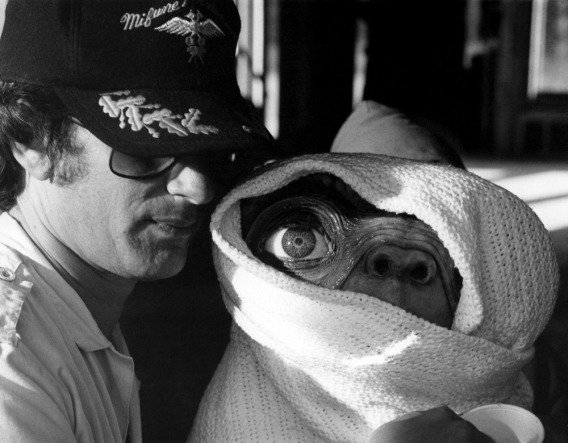 Three years after it became a worldwide box office phenomenon, E.T. was poised for re-release in theaters, and ENTERTAINMENT TONIGHT brought Henry Thomas and Drew Barrymore back to the suburban Tujunga, California neighborhood where they filmed the movie. They shared some of their fond memories of working there, from bike riding to food fights, and, more importantly, reflected on how the film had changed their lives.

“I’ve changed a lot, but I’ll always be the same in spirit,” said an adorably precocious Barrymore, who didn’t want to be seen as “braggy” or “conceited,” back in August of ’85.  Asked how many times she had watched the movie, she replied, “I’ve seen it 28 times I think, maybe 30.” And, of course, she knew back then that she wanted to be an actress when she grew up. 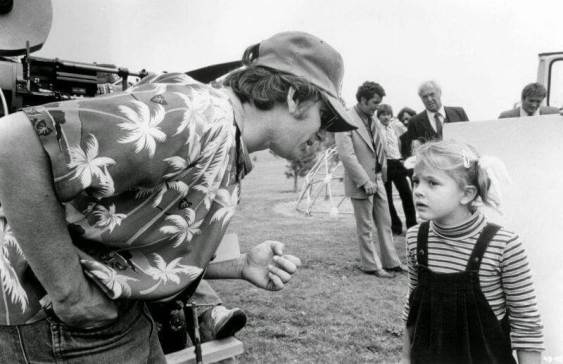 Henry Thomas seemed more serious about his experience with stardom. “I couldn’t do the things that a year ago would seem, you know, the easiest things to do,” he said about losing his anonymity. “They say, ‘There’s the kid from E.T., let’s go ask for his autograph.’ … I couldn’t be in the public eye for awhile.” While filming the Spielberg movie, the kids had no inkling whatsoever that the film could possibly become such a revered phenomenon. “We thought it was just going to be any old movie,” said Barrymore, while Thomas pondered, “It was basically just a film we had done and had a lot of fun on. I don’t really think that much about box office hits and all that. It just matters how you think you did, and how the film turned out overall.”

Cut to the 30th anniversary of E.T. the EXTRA-TERRESTRIAL. Working for ET myself, I sat down with Dee Wallace to talk about her experience playing the memorable mom in the movie. She reminisced about the joy of working on the set with the kids and how “that little animatronic thing” made a big impact on everyone. Working with E.T. himself “was like working with another actor,” she explained, pointing out that the beloved animatronic alien was “always alive; somebody was always working him, especially for Drew’s benefit, because she’d go over into the corner and start talking to him. … [She was] constantly confusing reality with fantasy.” 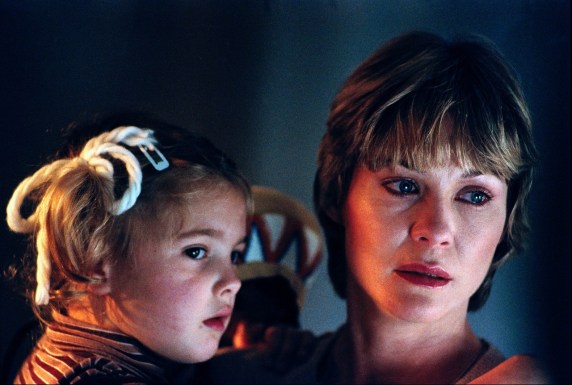 Wallace added that daily life on the set was like “a family affair.” At times, Wallace helped Barrymore with her homework because she had been a teacher herself before becoming an actress. And she offered that a major element that made working on the film so special was the fact that they shot it all in sequence — rarely the case in large-scale filmmaking — for the benefit of the kids and their understanding of the story’s emotional progression.

Overjoyed that a new generation would get to experience the film for the first time on Blu-ray, Wallace compared the enduring nature of E.T. to THE WIZARD OF OZ and declared, “It’s about the celebration of a movie that’s changed lives and touched lives and it’s still touching lives.” As part of the 30th anniversary Blu-ray release celebration, I got to be part of the action and filmed a scene with E.T. himself (through green-screen movie magic). Not too shabby! See the awkward emotional interaction below:

Revisiting E.T. so many years later, I still marvel at how Spielberg pulled off such a wonderful piece of filmmaking given my initial reservations upon seeing the alien itself for the first time. I’m glad I didn’t bail to go catch DAWN OF THE DEAD instead!

3 thoughts on “Phone Home: Spielberg and Kids on the Set of E.T. the Extra-Terrestrial”