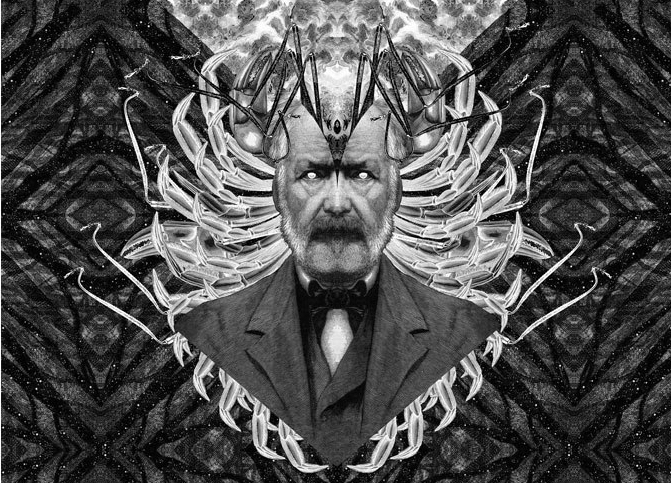 One of the great crimes in today’s attention-deficit society is the refusal by so many to spend the time to read anything beyond 100 words, or even 140 characters, and to challenge their minds, their views, their politics, their belief systems.

That’s why I find it so rewarding in this digitally driven media world that there still are great publishing companies out there that concern themselves not only with making and marketing new, thought-provoking materials but in carefully curating classic content that remains as relevant today as it was when it was first published. Case in point is the output of the London-based Folio Society, which specializes in reprints of classic titles with all-new, handsomely crafted editions featuring new and interesting art and packaging.

Folio is full steam ahead when it comes to classic genre titles, and one of their latest entries is also one of the best available for fans of Gothic horror: THE CALL OF CTHULHU AND OTHER WEIRD STORIES by H.P. Lovecraft. For those not in the know, Lovecraft is a hugely influential author and is considered to be a founding father of modern horror, notably inspiring such filmmakers as Guillermo del Toro, Stuart Gordon, and John Carpenter.

Among those directors’ various films, Gordon’s RE-ANIMATOR is directly based on Lovecraft’s short story HERBERT WEST – REANIMATOR, while Carpenter’s IN THE MOUTH OF MADNESS is a clear tribute to the author and his work. GdT has been trying to mount a production of AT THE MOUNTAINS OF MADNESS for years, while Gordon also tackled Lovecraft’s FROM BEYOND, THE OUTSIDER (released as CASTLE FREAK), and THE DREAMS IN THE WITCH HOUSE for an episode of MASTERS OF HORROR. Gordon also tried to get SHADOW OVER INNSMOUTH made into a film in the late ’80s/early ’90s. In fact, I remember seeing some spectacular, imaginative storyboards for the film with creepy fish folk concept designs by none other than late artist Bernie Wrightson during my days working at Full Moon Entertainment, which flirted with the idea of producing Lovecraft’s seaside tale but ultimately declined due to high-budget concerns and concept doubts. Gordon ultimately got to make his INNSMOUTH project in the form of DAGON, combining the two Lovecraft titles in his horror tribute released in 2001.

The “other weird stories” in Folio’s THE CALL OF CTHULHU AND OTHER WEIRD STORIES include many of his best-known works — THE OUTSIDER, HERBERT WEST – REANIMATOR, DAGON, and SHADOW OVER INNSMOUTH — so those looking to dive deeper into those movie adaptation origins need to look no further.

Lovecraft’s dark tales consistently detail a single narrator’s descent into madness and despair as he grapples with the daily torture of the commonplace, the supernatural, and a growing, fragmented sense of reality. In Lovecraft’s universe, we are very much human with potential, yet walking cages of limitation whose reach remains arbitrary to the indifferent actions of the cosmos and infinite great beyond. It’s very existential stuff written by a self-proclaimed agnostic in theory and atheist in practice who disdained religion.

“I choose weird stories because they suit my inclinations best,” wrote Lovecraft in 1933. “One of my strongest and most persistent wishes being to achieve, momentarily, the illusion of some strange suspension or violation of the galling limitations of time, space, and natural law which forever imprison us and frustrate our curiosity about the infinite cosmic spaces beyond the radius of our sight and analysis.” 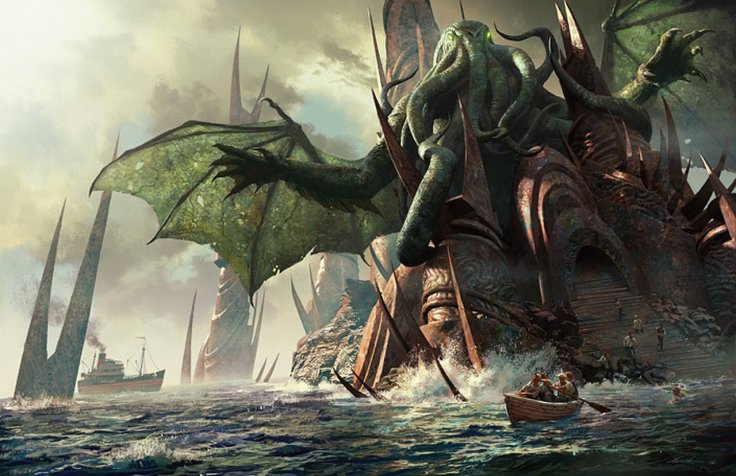 Those new to Lovecraft may have heard of Cthulhu — his tentacle-faced, cosmic-demon-god creation — or have seen it around in pop-culture ephemera, but have little to no idea who or what it is, much less how the name is pronounced (most agree to “Kuh-thoo-loo,” though Lovecraft pronounced it in different ways, because few could really master the writer’s other versions that don’t roll off the tongue very easily; relax, it’s from an alien language anyway). 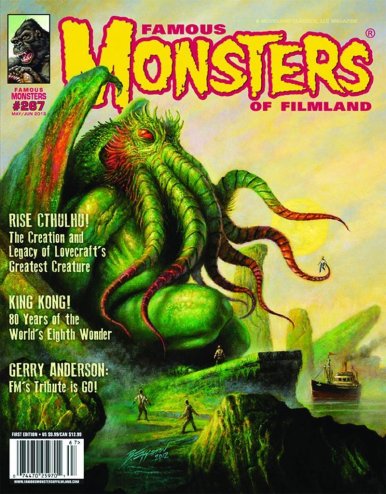 A whole mythos and expanding universe by way of other writers has grown way beyond what Lovecraft first started with Cthulhu (and the fabricated cult that awaits his return) in 1928, as he essentially kept the character to one story.

To keep it simple, all you need to know is that Cthulhu is a mythical deity from another galaxy, he came to Earth and inhabited the planet with his spawn, then went into a deep hibernation under the sea as humanity evolved. He would communicate with select individuals through their dreams, and awareness of his presence developed the Cult of Cthulhu, which anticipates the awakening of the creature from his long slumber and his inevitable rule of the planet.

In short: Our deepest, darkest fears will be realized when we pay for our sins through the destructive return of an almighty cosmic god. One of my favorite riffs on this concept was published in The Washington Post in 2016 in the form of this tongue-in-cheek letter in the opinion section: I, CTHULHU, ENDORSE DONALD TRUMP. Funny/frightening stuff, depending on how you lean…

So why the refusal by so many to challenge their minds, politics, and belief systems? Perhaps we should ask Cthulhu.

Folio’s THE CALL OF CTHULHU AND OTHER WEIRD STORIES has a wonderful introduction by THE WATCHMEN, V FOR VENDETTA and FROM HELL writer Alan Moore. He observes in part, “Lovecraft and his work endure because his terrors have a higher register that lifts them far above contemporary scares and bigotries, an existential dread informed by his awed comprehension of modern cosmology, where mankind is reduced to a chance viral outbreak on a vanishingly tiny fleck of dirt amid a random and unending avalanche of suns. Lovecraft expressed this devastating yet tangible unease using invented forms that have a frightful, pungent physicality; abstract conceptual horrors that the reader can reach out and touch or which, conversely, can reach out and touch the reader. … In his pantheon of unpronounceable, unknowable and shrewdly indescribable monstrosities, Lovecraft presents an alphabet of fear that can articulate our current insecurities, his prescient alienation an exact precursor of our own.”

Folio’s tome also features six intense, mind-blowing pen-and-ink illustrations by the incredibly talented Dan Hillier. Bound in cloth blocked with a design by the artist and a slipcase featuring an unblinking, monstrous eye, THE CALL OF CTHULHU AND OTHER WEIRD STORIES runs 472 pages and is also available in an ultra-cool, limited-edition (750 copies) presentation, bound in eco-simulated leather and lurking in a mysterious solander box with a print signed by Hillier.

Also new from Folio Society is a new edition of H.G. Wells’ WAR OF THE WORLDS, featuring stunning illustrations by artist Grahame Baker-Smith and an introduction by Iain Sinclair. A true classic that needs no introduction, the arrival of this version acts as a fun literary companion piece to the noteworthy Lovecraft edition described above. 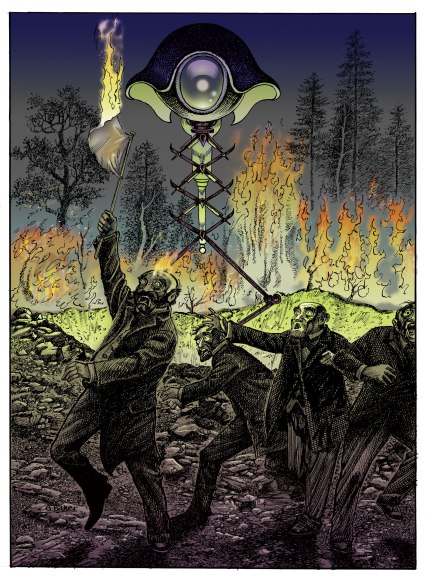 You made it to the end of the story! Good job. For more IT CAME FROM… coolness, try my ENTERTAINMENT TONIGHT-related tales and interviews,  or there’s plenty of STAR WARS musings, Famous Monsters fun, cool vintage movie lobby cards, and TWIN PEAKS weirdness.

Statues of the gods at ILM: Willis O’Brien and Ray Harryhausen. #SFX #VFX #ILM @ilmvfx #Lucasfilm #RayHarryhausen #WillisObrien #KingKong
Farewell, #NeilPeart. Peart was an absolute god to me, just another analog kid from the subdivisions who played the drums, worshipped #RUSH, and dreamed of greater possibilities. His lyrics, talent, drive and example were unmatched. RIP Neil. Devastated.
Okay, had to try one. Thanks, @fangoria, for making a fun one that #horror fans and the @80shorrordoc community could enjoy.
‪Is this still a thing? #StarTrek #StrangerinaStrangeLand #grok #Spock #Heinlein ‬#ItCameFromBlog
Wish I could reclaim the #RAIDEEN die-cast cycle with spring-loaded missiles I had as a kid... #ItCameFromBlog #Japanese #toys
Crossing the streams with my kid’s vintage bedsheets. #StarWars #TheBlackHole #ItCameFromBlog