As a lifetime lover of the cinema, I can pinpoint only a handful of moviegoing experiences in which the film itself truly changed my perspective and I found myself exiting the theater not only exhilarated — but practically a different person.

For much of my generation STAR WARS was that experience. That film not only entertained but transcended legions of people who decided there and then that making movies would become their dream vocation. I was most definitely one of those people. But before that, THE 7th VOYAGE OF SINBAD was the big-screen experience that rocked my world. Already a huge fan of dinosaurs and such classic Universal Monsters movies as DRACULA, FRANKENSTEIN, THE WOLF MAN, and CREATURE FROM THE BLACK LAGOON, my mom took me to see a revival screening of the 1958 film featuring Ray Harryhausen’s magical, stop-motion special effects in “Dynamation.”

I was entranced by Ray’s incredibly believable creatures and immediately set out to find as many films featuring his work as I could. I wanted to see more SINBAD films. I made the connection to Harryhausen’s previous work, having already seen THE BEAST FROM 20,000 FATHOMS, 20 MILLION MILES TO EARTH and MIGHTY JOE YOUNG. I spent many a Saturday afternoon watching more of Ray’s greatest hits on our small, black-and-white television. 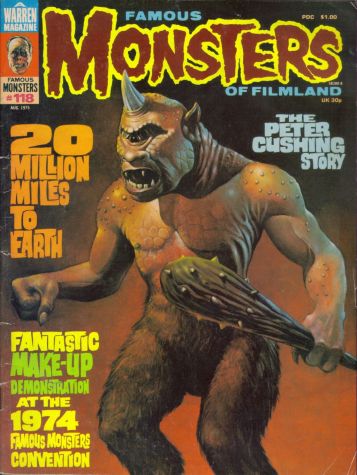 I couldn’t believe my luck when I’d be flipping around the dial and I’d catch the spectacle of a giant octopus tearing down the Golden Gate Bridge in IT CAME FROM BENEATH THE SEA, the desperate fight with a killer crab in MYSTERIOUS ISLAND, the insect-like aliens of FIRST MEN IN THE MOON, or a dino rampage in ONE MILLION YEARS B.C. or THE VALLEY OF GWANGI.

Seeing Ray’s work and amazing creations in THE 7TH VOYAGE OF SINBAD provided the impetus for me to pick up my first issue of Famous Monsters of Filmland. I was very taken with the Cyclops in 7TH VOYAGE and couldn’t believe my eyes when I saw the cover of FM #118 on the newsstand and there was Ray’s one-eyed creature staring right back at me, inviting me to find out more about the compelling cinematic experience I couldn’t stop thinking about.

When I was older and had seemingly “seen it all” with the STAR WARS special-effects renaissance, a first-run viewing of CLASH OF THE TITANS took me right back to the wonder of the first time I joined the Cult of Harryhausen, notably with Ray’s stop-motion pièce de résistance: Perseus’ epic battle with Medusa, with shadowy close-ups of the Gorgon that were influenced by Joan Crawford in MILDRED PIERCE, and a moment that sees Medusa pulling her torso along that was influenced by Tod Browning’s FREAKS.

I credit my adult obsession with multiple-armed religious icons to that spectacular scene in THE GOLDEN VOYAGE OF SINBAD in which the intrepid adventurer and his men battle a statue of the six-armed goddess Kali. As a kid growing up in suburban New York, I had never seen such an exotic statue like that before, and then to see it dance by the command of a sorcerer — and then sprout six swords to engage in combat — simply blew my mind. Now I can’t stop collecting exotic statuettes with four arms or more.

I can confidently say that in the new era of impressive CGI achievements that have become commonplace in every blockbuster made in Hollywood today, Ray’s work — crude by today’s effects standards — is exponentially more likable and tangible onscreen than the CGI-overload travesties on regular display. Contemporary visual effects remain cold and impersonal for the most part, and in comparison, Ray’s finest moments represent the literal human touch lacking in today’s Sci-Fi and fantasy films. Ray earned the sense of wonder he set out to achieve. He cared about his creatures, and so do we. 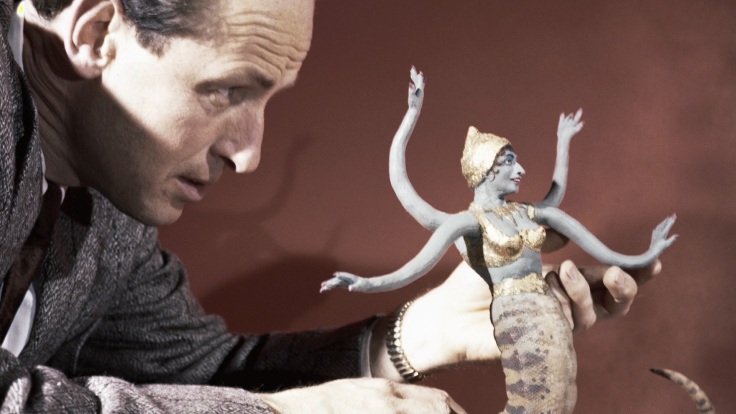 If you’re a fan of the late Ray Harryhausen, please take the opportunity to introduce someone new to his greatest hits with your own custom Saturday matinee. Keep his cinematic legacy alive, and share the true artistry and wide-eyed wonder that brought real magic to the movies in his heyday.

4 thoughts on “For the Love of Fantasy and Ray Harryhausen”