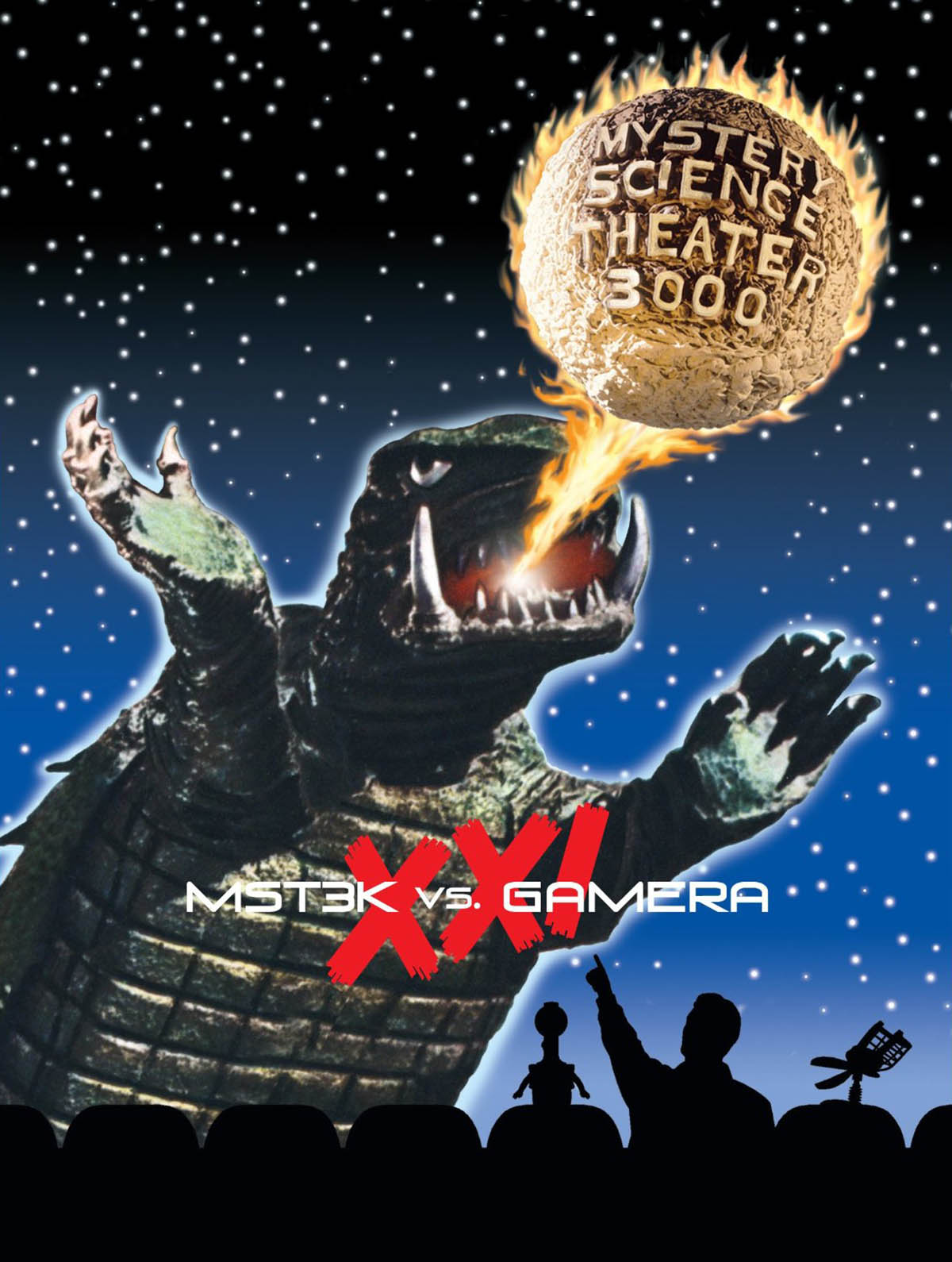 Gamera and MYSTERY SCIENCE THEATER 3000 have a special connection, with the fiery kaiju hero unwittingly becoming a comedy muse of sorts for the cult-hit program during its formative episodes in the late’80s.

We all love Gamera, but you have to admit that the concept of a giant atomic-age turtle who flies like a spinning Thai firework is more than a bit silly. Yet, when I was a kid, I took the Gamera movies very, very seriously (I also took Adam West’s Batman very seriously, for that matter). Although Godzilla was King of the Monsters as far as I was concerned (the term kaiju wasn’t bandied about so nonchalantly back in ‘70s pop culture), Gamera was right up there for pure Tokyo-crushing, giant rubber monster smackdown entertainment.

But as I grew older, the Gamera movies stayed back there with my childhood and remained a fond, hazy memory. I never really gave much thought about how bad those movies really were; they just seemed like lovably dopey matinees that were specifically aimed at kids. Then, when Hodgson and the maniacal minds of MYSTERY SCIENCE THEATER 3000 got their hands on the early Gamera films and began featuring them in their “ironic viewing” format — relentlessly skewered them over the campfire — I finally had to face the reality that the first handful of Gamera films produced in the late 60s and early ‘70s were a super ripe target. Despite having to choke on my own nostalgia, I also had to admit that there was perhaps no better movie monster to make fun of.

For the Famous Monsters of Filmland Gamera Golden Anniversary issue, I enjoyed chatting with MST3K creator Joel Hodgson, who happily reminisced about those turtle salad days; to share his appreciation of — and curious fascination with — the creature and its franchise; and to detail the show’s endless amusement with the Japanese films’ various tropes, as well as with the producer who introduced Gamera to American audiences, (the perhaps unfortunately named) Sandy Frank.

“The movies are really wonderful, and you kind of can’t believe that they made them,” said Hodgson with bemused admiration. “You look at them and it just makes you happy that somebody, for some reason, wanted to create them.”

He continued, “My impression is Gamera is like a complete knock-off of Godzilla, except it’s a turtle instead of a lizard. It’s even goofier than a giant lizard. It’s the biggest knockoff ever. That’s my take on it. It’s just that simple, that blunt, and we love that. We love that you could just change the animal and you have another completely different series of movies. … It’s real calculated and kind of cynical, I guess, but that’s why it’s so great.”

Unlike my upbringing with annual, full-fledged “Gamera Week” showings on ABC’s THE 4:30 MOVIE growing up in the suburbs of New York City (we were also privy to “Planet of the Apes Week,” “Monster Week,” “Sci-FI Week” and more), Gamera was completely unknown to the Wisconsin-raised Hodgson, who was at the mercy of less-inspired local TV station schedules during his childhood.

“Oh my god, I would’ve loved that,” reacted Hodgson to the thought of getting a week-long helping of the giant fire-breathing turtle as a kid. “I’m so envious, because I grew up in the midwest, and they just didn’t have very good programming, so anytime you’d see something like that, it was by accident, and it’s just so magical and great.”

Those early experiences of flipping though channels and hitting the jackpot with the ultimate B-movie formed the foundation of MST3K. Hodgson said, “What we did for the MST3K pilot was THE GREEN SLIME, which to me is the perfect MYSTERY SCIENCE THEATER movie and what my thesis was at the time. It’s got everything we need: a crazy, rubber-suited monster, it’s a Japanese-American co-production… “ But sifting through theTV station library for more fertile targets after that GREEN SLIME pilot episode proved to be more of a challenge.

“These film distributors, you’d buy a movie package with 22 movies; 11 of them would be good movies and 11 of them would be movies that [only] we wanted,” explained Hodgson of the licensed titles at KTMA, the UHF station in Minneapolis-St. Paul where MST3K was born. “And when we first started to look into that, they thought we were out of our minds. This was like the baby laxative they’re putting in the cocaine.”

Struggling to recapture the magic of that pilot episode given the limited titles available to the show, it wasn’t until Hodgson stumbled onto those early Gamera films that he felt like he struck gold.

“Everything fell into place when we did Gamera; the mood and the tone of the show became very clear,” he said. “I was just so grateful we hit those at the time and got to do them. It was just this blessing. … Gamera, to me, is kind of like the next best thing to THE GREEN SLIME just as far as content and the way it feels.”

Starting with GAMERA vs. BARUGON (1966) back-to-back with the tusky turtle’s black-and-white debut in 1965, the MYSTERY SCIENCE THEATER 3000 crew ultimately plowed through five Gamera films, including 1967’s GAMERA vs. GAOS (my personal favorite), GAMERA vs. GUIRON (1969) and GAMERA vs. ZIGRA (1971) — and went back for more helpings of humor with some of the same films after they were picked up by The Comedy Channel, later renamed Comedy Central. Returning to Gamera made it easy for Hodgson and his cohorts after a tough first season of DIY production, and gaining a budget to commit more silliness between riffing sessions, from goofy Gaos arts & crafts activities to mangling the Gamera theme song, sure helped things.

“We were so exhausted,” remembered Hodgson. “We were just doing everything ourselves: we built the sets, we were doing the props — it was just crazy. And then the second season it was kind of like we had gotten some critical acclaim, and we got a bigger budget. … We were able to hire a prop guy, and we were able to redo the set the way we wanted to, and finally, at like the fifth or sixth episode, we get to Gamera again, and it was just so great again. I said to myself, ‘This is so great because we know these are going to be great episodes,’ and for the first time we were familiar with the material, so it won’t be quite so much work.”

The staples of every Gamera film are perfect for spot-on riffing, including the god-awful English dubbing, the plucky kid(s) who befriend Gamera (Gamera loves kids!), the rubber-suited enemy opponent with a strangely shaped body (a “Mack the Knife” joke was inevitable for the blade-headed Guiron), the strange, malevolent cosmic alien women (with befuddling Southern accents, no less) — and Sandy Frank’s moniker caught in the crossfire.

“It was really a different time [in the ‘60s] where those producers could stay anonymous their whole lives: ‘Yeah, I’ll attach my name to that. Who’s gonna notice?’” laughed Hodgson about the prolific Frank, who also imported Japan’s GATCHAMAN in 1978 to the U.S. as BATTLE OF THE PLANETS to capitalize on the STAR WARS craze. “We just noticed this name, Sandy Frank, and someone said something like, ‘That’s a hot dog in the sand,’ and then we kept seeing his name. It was just one of those funny things.”

One can’t deny that for a series of films pretty much aimed at kids, there are some subtle mixed messages where those nubile “space babes” are concerned. As a kid, you take television at face value, with the subconscious faith that the programming gods have your best interests at heart. Contemplating those cosmic chicks, Hodgson just scratched his head and smiled.

“You get all these messages in these movies, and there’s all this erotica mixed in, and it’s so peculiar,” he chuckled. “You just kind of absorb this thing, and you know something’s wrong, and you don’t exactly know what it is.”

“I think it’s more puzzling when you’re a kid,” he continued. “As adults you can take it apart and go, ‘Oh yeah, [the producer] licensed these movies, he found a dubbing house, he said, ‘Can somebody please do a translation of the script? Work it out. How much is this going to cost me,’ and then the next thing you know, they’re making copies of it, and shipping it, and he’s got this pipeline, you know? But meanwhile, you’ve got to be this kid sitting in front of the TV, expecting it to be giving you real information, and it’s not. It’s this confusing, crazy, great thing. You believe that this is the work of brilliant people that are looking out for you and held to a higher standard, and I think that’s the funniest, weirdest part. When you’re a kid, and alone with it, you just accept it. But it’s so weird — and it feels so good.”

(This article first appeared in Famous Monsters of Filmland issue #280)

Writing and maintaining IT CAME FROM… is a true labor of love.

Please consider showing your appreciation and helping to keep the site ad free and free for all (no paywalls) by donating a couple bucks with BUY ME A COFFEE. It’s quick and easy!

#WoodyWoodpecker, is that you?
#NightoftheLivingDead #TV #horror
Check your email boxes @80shorrordoc friends and fiends! The digital copy of #InSearchOfDarkness Part III has arrived! #80s #horror
Happy Thanksgiving everyone! 🦃🦃🦃
#Creepshow #NECA
It’s a scary world out there, and it’s on the verge of being even scarier... Make sure to #VOTE on Tuesday, and urge your friends and relatives to do the same. This is a crucial election - so many of your fundamental rights are at stake!