Medusa from CLASH OF THE TITANS reads Famous Monsters. I know this to be true from the photographic evidence provided by the fine folks at the Ray and Diana Harryhausen Foundation. 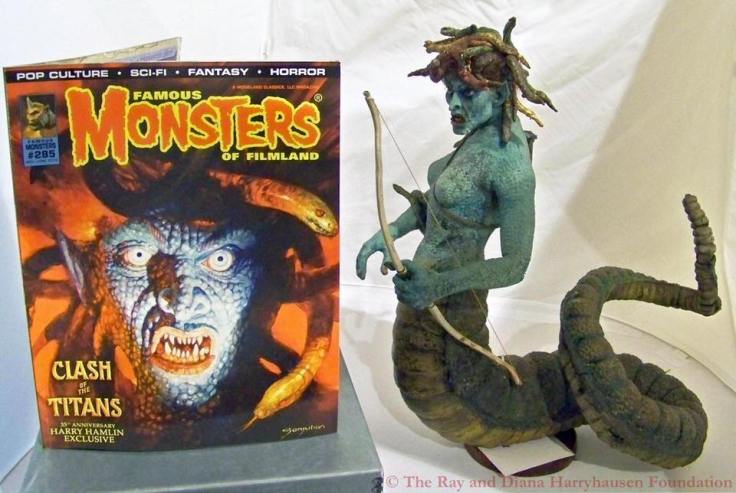 So what’s the real story behind this photo? Famous Monsters #285 featured a tribute to the 1981 Ray Harryhausen classic, highlighted by a new, exclusive interview with its star, Harry Hamlin. Hamlin discussed his involvement, from script to screen, in what would ultimately become Harryhausen’s last major Hollywood feature. Of course, Hamlin went into wonderful detail about the process of working with Harryhausen, from battling giant scorpions (swinging a sword at thin air, seeing as the creatures had to be added later) to watching the master’s meticulous approach to his stop-motion art — and then observing him sip his favorite drink after clicking each laborious frame.

The folks at the Ray and Diana Harryhausen Foundation had an opportunity to read the issue and then told me that they were overjoyed with the coverage. They requested a few extra copies to be added to their ample archives, and we struck up a nice, cordial friendship. In return for the favor of sending copies of FM across the pond, they told me to expect to see “a surprise” on social media in the next couple days.

Well, what a surprise it was. They made a major effort to retrieve the actual, screen-used Medusa model from storage and pose her with the magazine as if she was reading about herself. As bucket-list moments go, seeing the physical creature that put me on the edge of my seat as a kid watching CLASH OF THE TITANS released from purgatory — and “reading” FM just for this special occasion — was pure geek bliss.

Thanks again to the Ray and Diana Harryhausen Foundation for arranging this photo. What a thrill!