In September 2013, the stars and filmmakers of STAR TREK INTO DARKNESS came out to premiere their blockbuster sequel on Blu-ray/DVD with a huge party beneath the Space Shuttle Endeavour at the California Science Center in Los Angeles. Director J.J. Abrams was joined by Starfleet crewmembers that included Simon Pegg, John Cho, Bruce Greenwood, Deep Roy, Peter Weller, Nazneen Contractor, Alice Eve and Leonard Nimoy to celebrate beneath the wings of one of NASA’s finest creations.

Needless to say, Paramount publicity threw a stellar shindig and the unique location provided for an ultra-cool photo op. How often does one get to drink TREK-themed cocktails and sit in the Enterprise Captain’s Chair with the frickin’ Endeavour on display behind you?

Working the “white carpet” for ENTERTAINMENT TONIGHT, I got to ask some light, fun TREK-related questions. But I also engaged Simon Pegg about his recent friction with a faction of hardcore TREK fans, and a particular journalist, who felt the need to point out to him that INTO DARKNESS had placed dead last in a Vegas poll of all TREK films. 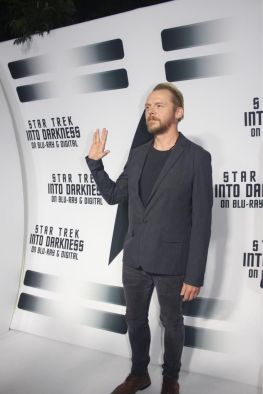 “If you’re doing an interview and somebody says, ‘Oh that,’ you tend to react emotionally,” Pegg told me of his resounding “F.U.” to the film’s detractors. “We worked really hard on this. I care about it. My friends are in it. When somebody just goes, ‘Ah, pfffft,’ you just want to say what I said.” He explained that the journalist who asked him the question was just as much to blame, “Because I felt like it was a bit, ‘Well, what are you telling me this for?’ I thought it was a divisive move to spring on me, and it kind of pissed me off, to be honest. I’m a human being, so if you don’t like what I say, sorry, but there we go.”

Finishing the video cut on a lighter note, the Miley Cyrus “twerking” controversy — if you want to even call it that — was very fresh on people’s minds in the pop-culture stratosphere, so I took it upon myself to ask the crucial carpet question: “Keep on Trekking, or keep on Twerking?” Watch the video:

For me, what ultimately made this event so special — other than the fact that I am, and always shall be, a die-hard Trekkie — was that it was the last time I saw Leonard Nimoy. All smiles, he showed up on the carpet only for a brief time and skipped any visible mingling at the party, then disappeared into the night. His health seemed fine, and he seemed to enjoy the energy of the crowd and location. He also sported a shirt that read, “LLAP.” Sadly, he passed away a year and a half later on February 27, 2015.

Live Long and Prosper, Leonard. You are still very much missed by the STAR TREK community.

#WoodyWoodpecker, is that you?
#NightoftheLivingDead #TV #horror
Check your email boxes @80shorrordoc friends and fiends! The digital copy of #InSearchOfDarkness Part III has arrived! #80s #horror
Happy Thanksgiving everyone! 🦃🦃🦃
#Creepshow #NECA
It’s a scary world out there, and it’s on the verge of being even scarier... Make sure to #VOTE on Tuesday, and urge your friends and relatives to do the same. This is a crucial election - so many of your fundamental rights are at stake!