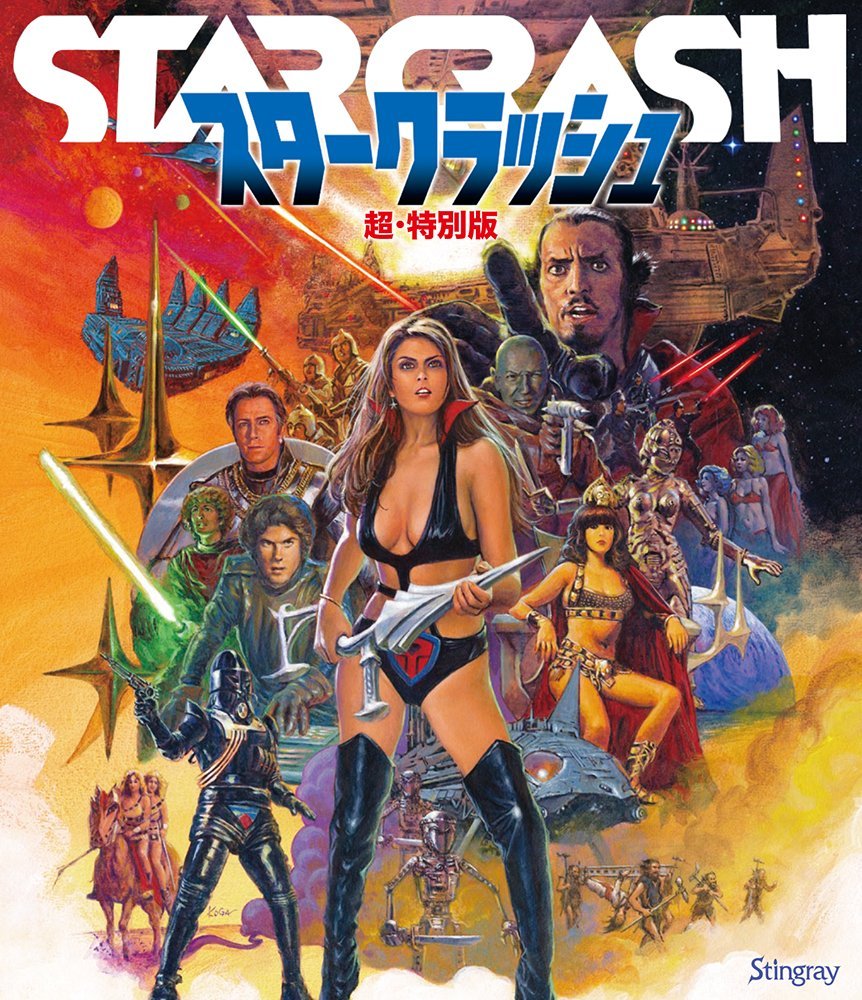 Sure, I knew that STAR CRASH was bad. But in the post-STAR WARS universe of 1978, anything with robots, spaceships, laser blasts and light swords looked cool, even though it was an obvious ripoff. Back then, we were all transformed by George Lucas’ masterpiece, and kids were hungry for anything that resembled STAR WARS. Still, I remember that there was something strange about STAR CRASH. It looked a little off, and it wasn’t until years later that I figured out that “a little off” meant low budget. 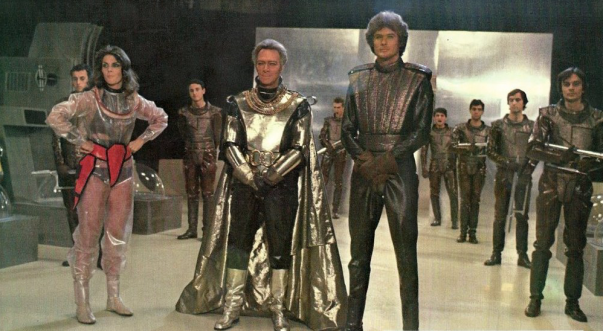 It had been eons since I’d watched the film, even for kicks. But after revisiting it through the filter of the new MYSTERY SCIENCE THEATER 3000 on Netflix, I’ve come to realize that STAR CRASH (or STARCRASH, or STARCRASH: THE ADVENTURES OF STELLA STAR) gloriously transcends the craptastic. 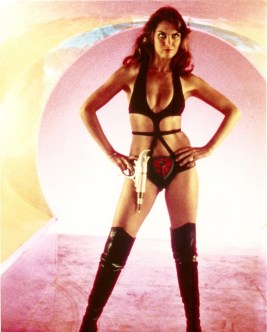 It really is fun in a PLAN 9 FROM OUTER SPACE-by-way-of-Roger Corman kind of manner. It’s so goofy and completely stuck in the ’60s that every arbitrary moment, every line of awful dialogue, every curly male perm and Loverboy leather motorcycle suit, every hijacked BARBARELLA costume, every bad guy cape and helmet — it all feels like a precursor to SPACEBALLS. Every clunky Harryhausen-style stop-motion creature/robot stumble, every boxy/bumpy starship design, every “ray gun” they carry — it all exudes the charm of hardworking craftspersons behind the scenes who really tried to make a good movie, but were simply incapable of pulling it off, each armed with a $99 department budget and a misguided lack of imagination.

Even the film’s score by the ever-reliable John Barry feels completely out of place. Thinking back on this interstellar misfire, you know you’ve got a problem if kids walk out of a space action movie and it never even occurs to them to seek out an action figure or die-cast spaceship from the film. I sure didn’t. Still, STAR CRASH has an epic poster, with a crouched Stella Star ready for action. Upon closer examination, she does not look at all like Caroline Munro; more like Pamela Sue Martin from TV’s NANCY DREW MYSTERIES (how’s that nod for you, ’70s TV addicts?). 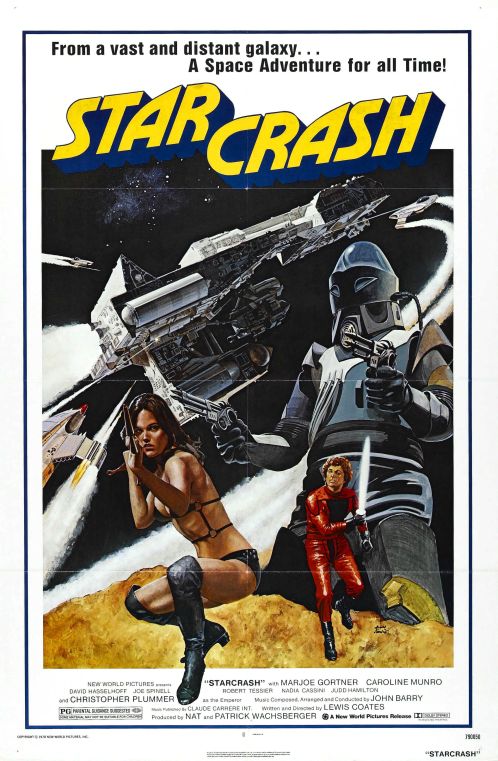 I used to have a huge crush on Caroline Munro. Aside from STAR CRASH, she melted my pre-teen heart as the sexiest homicidal chopper pilot ever to wink and gun for 007. She made that already stunning Lotus Esprit mountain chase in THE SPY WHO LOVED ME even more memorable — an added touch of flirtatious danger to a bravura action sequence. 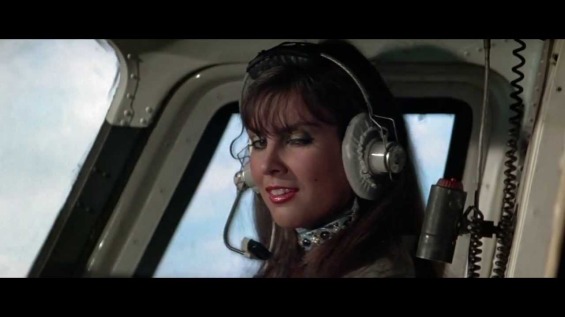 Prior to that ’77 Bond flick — the first I ever saw in the theater with my dad — Munro got my primal juices flowing as the slave girl Margiana in 1973’s THE GOLDEN VOYAGE OF SINBAD, which I first watched on television. I loved that exotic ARABIAN NIGHTS-inspired outfit — and the fact that she saved Sinbad’s life with a timely reveal of her well-placed eye tattoo. On her palm, fellas. Remember? 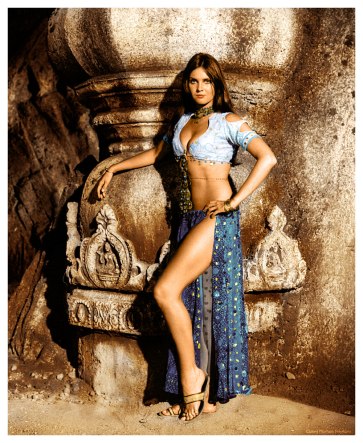 Caroline Munro stirred my young imagination in a bunch of genre films in the ’70s, from Hammer Horror films such as DRACULA A.D. 1972 and CAPTAIN KRONOS – VAMPIRE HUNTER to the presciently steampunk AT THE EARTH’S CORE (which also gets skewered in the new MST3K). An interesting side note: Munro was offered the role of the villainous Ursa in Richard Donner’s SUPERMAN: THE MOVIE and SUPERMAN II, but turned the role down to appear in THE SPY WHO LOVED ME. The scheduling conflict gave way to Sarah Douglas to own the part of the Kryptonian villainess. But that sure would’ve been cool to see Munro strut her stuff alongside General Zod, don’t you think? 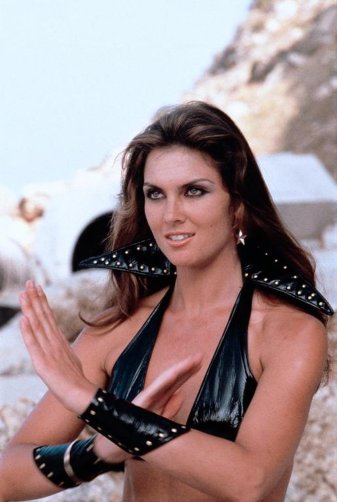 I’ll return to more Caroline Munro musings at a later date. There’s plenty to talk about. Until then, I have a very important question: What exactly is going on in this picture of her with Richard Kiel, aka Jaws in THE SPY WHO LOVED ME? Discuss… 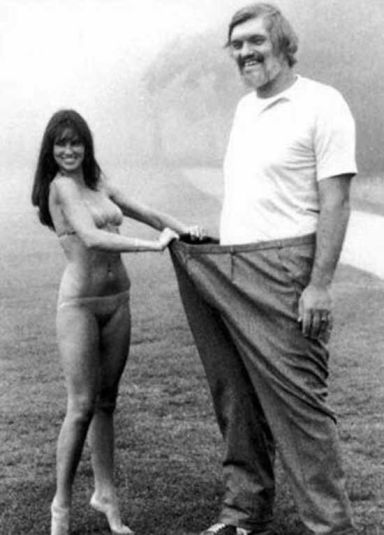