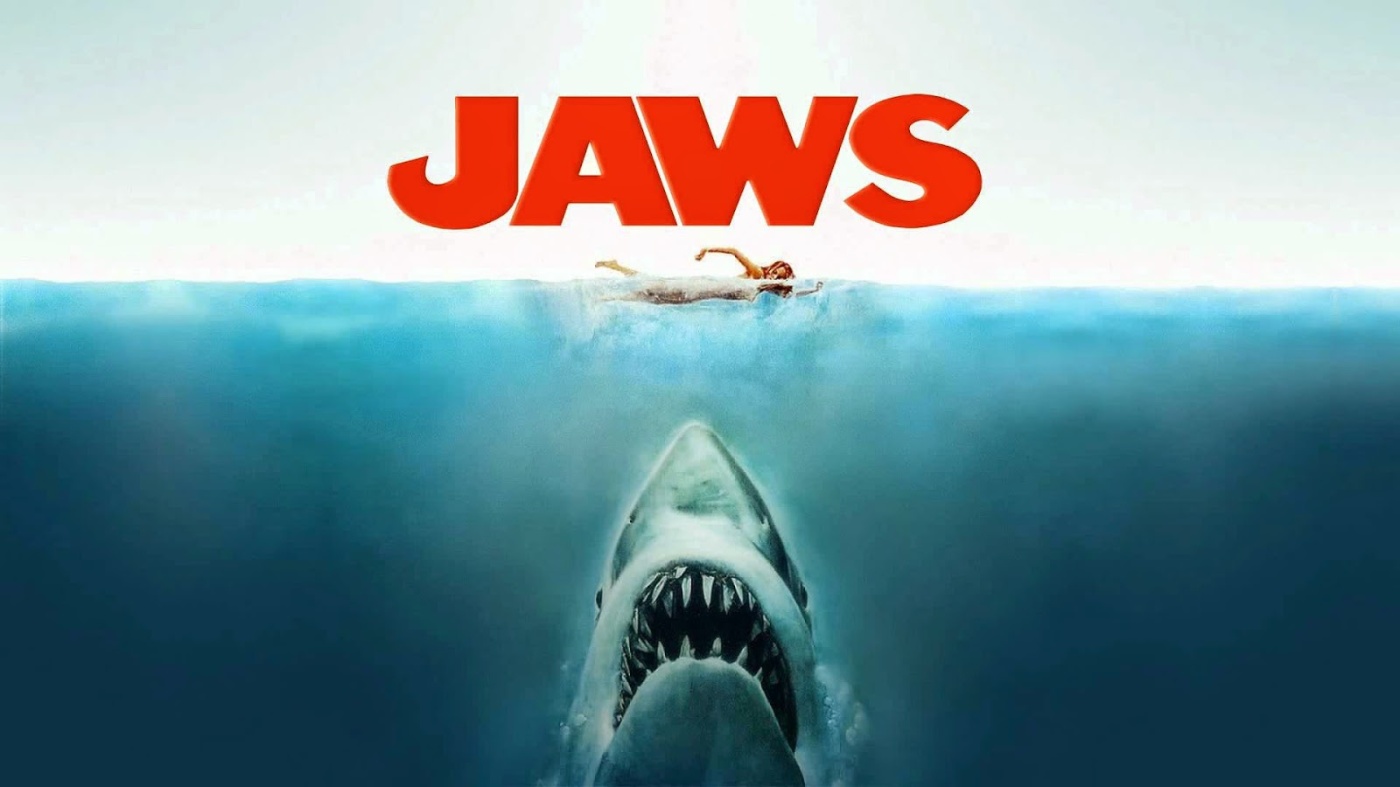 Forty-two years ago, JAWS emerged from the depths and made movie history. Are you still afraid to go into the water? You have Steven Spielberg to thank for that.

Spielberg’s man vs. shark blockbuster debuted in theaters on June 20, just in time to kick off the swimming season, and audiences in the summer of ’75 would become utterly consumed by the film. With JAWS, the Hollywood blockbuster was truly born, and it came of age with the release of STAR WARS just two years later. That one-two punch would change the rules of how major Hollywood movies are made, marketed and released, and studios would forever after be swinging for the fences on opening weekend. The success of JAWS signaled to studios that summer was the official magic season to open a popcorn flick wide (and even expand its distribution) with the help of heavy TV-commercial saturation strategies.

Much has been written about the Spielberg film, based on the bestselling novel by Peter Benchley. Co-screenwriter Carl Gottlieb’s account of the production process, THE JAWS LOG, remains the best insider source in my opinion (and it’s been nicely expanded since the first printing).

Full of great anecdotes from the trenches, it expertly captures the drama and chaos of what went down when the mechanical shark broke down; how a still wet-behind-the-ears twentysomething director triumphed over creative differences, stormy weather, self-doubt, a runaway budget, studio pressure — and still managed to deliver a cinematic triumph.

After its release, JAWS would go on to recoup its budget in just three weeks. It beat THE GODFATHER to gross more than $120 million (in 1975 dollars!) domestically in its first run, the first U.S. film to smash the $100 million ceiling. And it won three Oscars (Best Film Editing, Best Sound, and Best Score) alongside a nomination for Best Picture (ONE FLEW OVER THE CUCKOO’S NEST claimed the top prize that year).

When JAWS resurfaced a few years ago with an all-new, restored edition on Blu-ray, I had the opportunity to speak with several authorities on the film — on the Universal Studios lot in Burbank, CA, at the classic JAWS attraction, no less — about the impact of the film on pop culture, its influence, and its enduring nature.

“I saw JAWS in a theater in 1975; I was six years old and it scared me, it thrilled me, and it changed the course of my life,” said J. Michael Roddy, producer of THE SHARK IS STILL WORKING, a lovingly made, in-depth JAWS documentary included on the Blu-ray. THE SHARK IS STILL WORKING dives into the making of the Universal film and how it influenced a generation of filmmakers. Enthusiastic about seeing his favorite film fully restored in HD, he commented, “I urge everyone to look at the film again because you’d be surprised what your imagination can do for you.”

Gottlieb, who co-wrote JAWS with Benchley and also starred in the film as Meadows, told me, “I had spent three months of my life living, eating, breathing, sleeping, dreaming JAWS.” When it came to streamlining Benchley’s story for the big screen, he revealed that he had to drop a romantic subplot between Ellen Brody (Lorraine Gary) and Matt Hooper (Richard Dreyfuss) – as well as take a major bite out of his own character’s screen time. “Once we met the characters, the actors playing the parts were so agreeable and pleasant and nice that you couldn’t conceive of them cheating on the police chief (played by Roy Scheider); so that whole subplot had to go, and when it did, the story became really pure,” he explained. He added, “We were so pressured to shoot the story we had that there wasn’t a lot that was left on the cutting room floor, except for my part as Meadows. I had the very painful experience for an actor of writing myself out of the script, and that hurt.”

Joe Alves, the film’s production designer who went on to work on JAWS 2 and direct JAWS 3D, told me that the infamous technical problems surrounding the film’s mechanical shark “were certainly not exaggerated,” but he wanted to clarify that he was tasked to build a working prop that required two years to fabricate — but was only given five months to do it in order to beat an actor’s strike.

“We were shooting an early movie back East in May and putting people in ice cold water; we were shooting on an island so everything had to be trucked in from a ferry or flown in, so nothing was that convenient; you had the very wealthy people that had summer homes that weren’t too happy to have us there,” explained Alves. “So those were the problems that we had. You know — shark, people, politics, etc.” 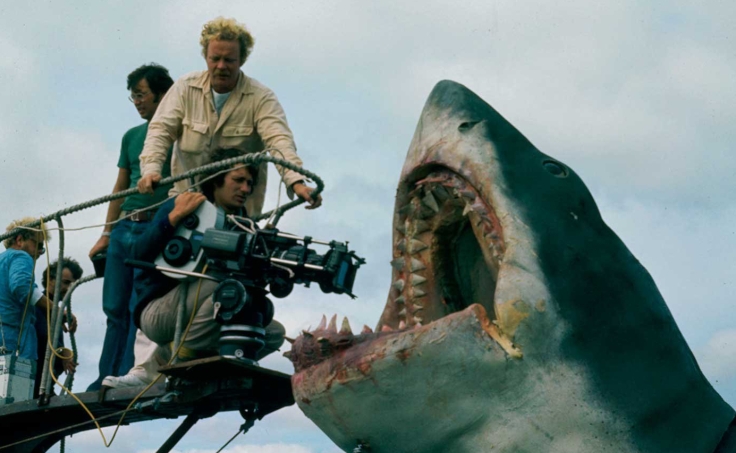 But with frustrating mechanical difficulties came creative inspiration, and Alves said, “When I designed the boat [in the film], I had these yellow barrels — I painted them yellow so they would be contrasted to the blue ocean — so when the shark wasn’t ready yet, the barrels substituted for the shark. When the yellow barrel popped up, and John Williams’ music was there, it worked.”

If JAWS were made today, there is no doubt that the shark would be CGI rather than mechanical. The proof is onscreen in such recent films as THE SHALLOWS with Blake Lively and this summer’s 47 METERS DOWN with Mandy Moore, and the general consensus is that of disappointment where the sharks are concerned. Still, practically nothing is sacred these days in the remake-rabid world of contemporary Hollywood. Is JAWS exempt from today’s reboot frenzy? I asked Roddy what he thought.

“I would dare any filmmaker to try to remake JAWS; I think that’s one that’s completely off limits,” he responded. “If JAWS were remade today, I’m sure it would be CGI. It would do a lot of things and it would look great, but I think you would lose what JAWS was ultimately about, which is man versus nature: You have three men who are very different who have to band together and get over their differences to defeat nature. That’s its core. If you lose sight of that, it wouldn’t have the power or emotion that the original film does.”

Roddy is completely right: Story comes first before spectacle. If audiences don’t buy the stakes and believe the drama, it doesn’t matter how great the special effects are. We see the stumbles time and time again, and JAWS remains the gold standard in terms of solid character storytelling that goes from intimate to epic.

Of course, when any film becomes a bonafide phenomenon, merchandising appears almost everywhere, from goofy games to iron-on apparel. In 1975, JAWS also launched an armada of parodies, from New Yorker cartoons and MAD magazine satires to music spoofs. The iconic JAWS theme alone has appeared in dozens of other films and TV shows as ripoff and parody. Everyone knows what’s coming when that dum-dum-dum-dum-dum-dum starts playing, even if you haven’t actually seen JAWS. 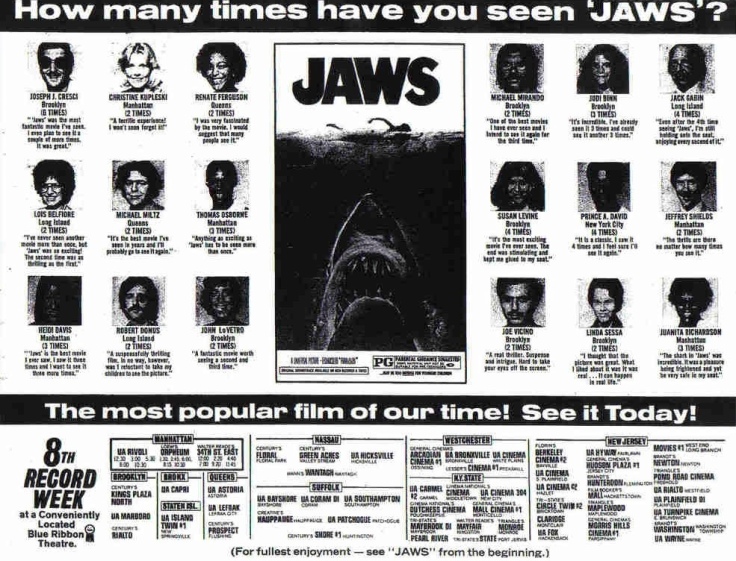 My favorite offshoot of this mania was the hit single MR. JAWS by Dickie Goodman. A music producer, Goodman was quick to jump on the JAWS bandwagon and assembled his novelty song for distribution just weeks after JAWS became the talk of the town, out by September of ’75. MR. JAWS is a smirk-inducing tale of a reporter who interviews the infamous title character (along with the film’s main characters) with answers provided by several of the year’s top hits — including WHY CAN’T WE BE FRIENDS by War, THE HUSTLE by Van McCoy, LOVE WILL KEEP US TOGETHER by Captain & Tennille, and RHINESTONE COWBOY by Glen Campbell. MR. JAWS peaked at No. 4 on the Billboard charts, and it’s a real time capsule — not only of the JAWS phenomenon, but of the various hit tunes of 1975. Good times…

Listen to it here:

And why not try these Steven Spielberg stories and interviews on IT CAME FROM… or go the STAR WARS route, as there’s plenty of cool material written about that little film.

2 thoughts on “When ‘Jaws’ Changed the Game”