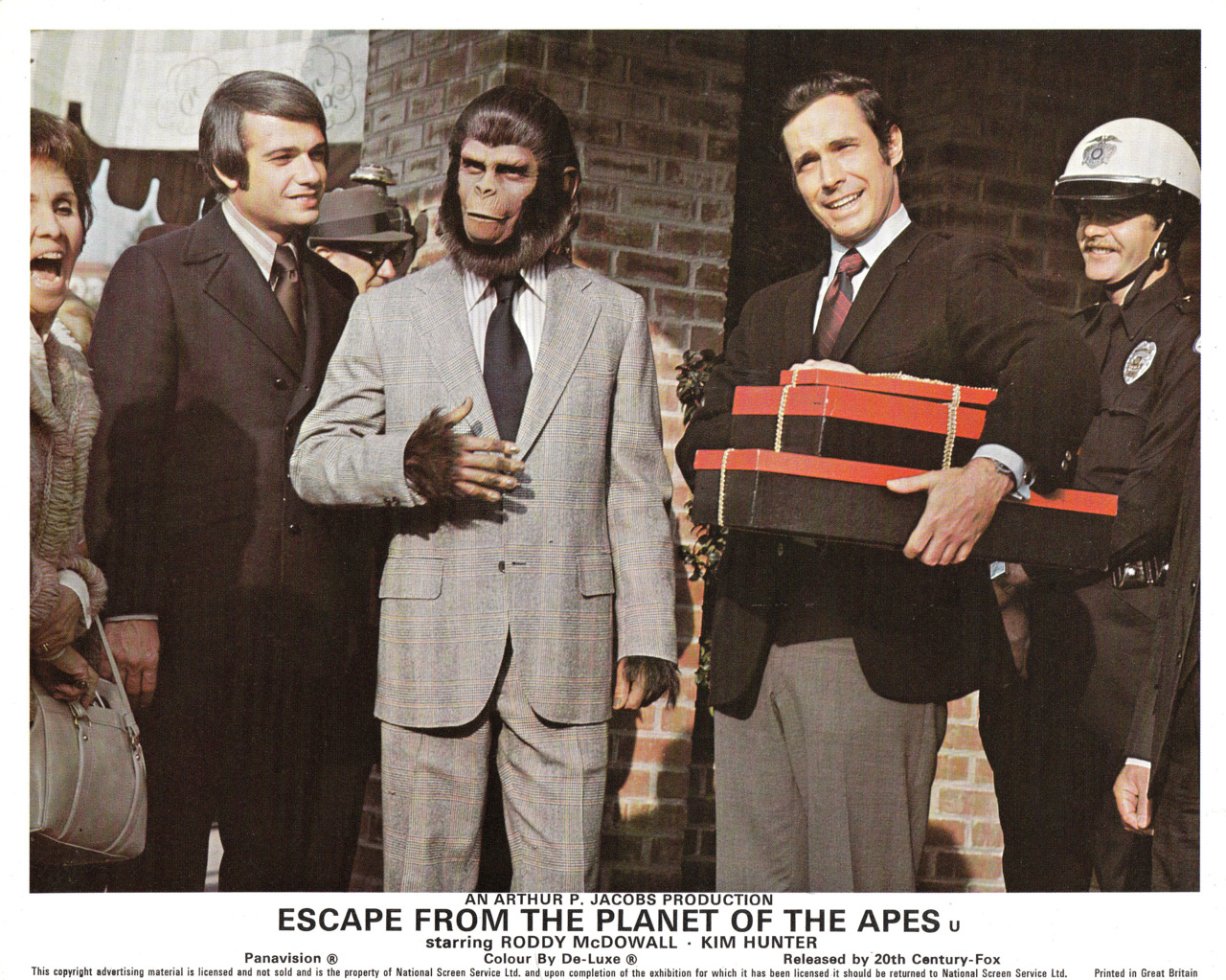 WAR FOR THE PLANET OF THE APES arrives in theaters this week, and I am extremely excited for this third entry in the rebooted APES series. 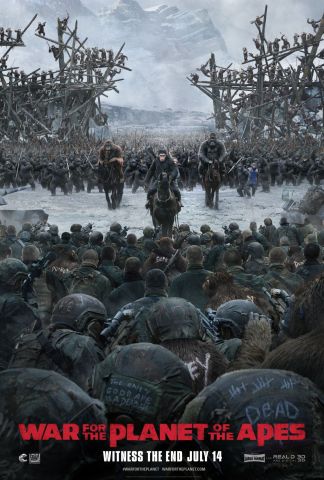 The quality storytelling in both RISE and DAWN OF THE PLANET OF THE APES unexpectedly raised the bar for the almost 50-year-old franchise, and a recent rewatch of DAWN reminded me of how these new films are packed with emotion and intelligence, making the onscreen stakes and conflicts that play out much more compelling.

In the capable hands of director Matt Reeves and motion-capture star Andy Serkis as Caesar, I’d gladly watch more new APES films by 20th Century Fox to see just where the narrative will take us and how closely it will skew to the original franchise storyline.

And, please, just give Andy Serkis an Oscar nomination already, if not a special award. The man who gave us Gollum is a pioneer in the mo-cap arena of special effects and his performances have consistently given heart and soul to every character he has portrayed, especially Caesar. Perhaps this year the Motion Picture Academy will recognize that CGI performances are more than just pixels; they’re people.

My PLANET OF THE APES experience dates back to my childhood in the ’70s. Growing up in the suburbs of New York City, I used to watch THE 4:30 MOVIE weekdays on WABC Channel 7. The genre-film programming on this local station was stellar, with theme weeks dominating the line-up such as Monster Week, Vincent Price Week, Edgar Allen Poe Week, Sci-Fi Week, Lost World Week, and, of course, PLANET OF THE APES Week.

Ape Fever was strong in the early ’70s, and I was very much caught up in it. I read the Pierre Boulle novel and wondered why it was so different from the films. I watched the short-lived PLANET OF THE APES TV series first-run in 1974 and caught every episode of the Saturday morning animated cartoon series RETURN TO THE PLANET OF THE APES the following year. I owned several of the Mego eight-inch action figures, including Cornelius, Zira, Soldier Ape, Alan Verdon, and “Astronaut,” which really felt like a rehashed “Action Jackson” figure.

I coveted the many other Mego APES playsets and accessories, like that awesome Apes Treehouse with the flip-action secret weapons bench and “Detention Pen,” and that Apes Fortress with the “Sun Reflector” at the top. I also wanted that Mattel Rapid-Fire Rifle with Ape Mask set that sat on the shelf at the toy store, beckoning, but my mom wasn’t too keen to see me running around with a gun and a horrid rubber mask.

Simply put, I’m a huge fan of the original APES films (save for BATTLE FOR THE PLANET OF THE APES, which always felt like an afterthought that never quite fit with the first four films in the series). Watched in order, APES, BENEATH, ESCAPE, and CONQUEST transported me into my first futuristic wasteland cinematically, left me gobsmacked when Taylor realized that he was on Earth and not some crazy Ape-run planet (“You maniacs! You blew it up! Aww, damn you! God damn you all to hell!”), and then ultimately delivered a narrative time-loop paradox that blew my kiddie mind when Roddy McDowall, as Caesar in the final burning frames of CONQUEST, promised “the birth of the Planet of the Apes!”

As far as pure Sci-Fi goes, BENEATH remains my favorite of all APES films thanks to the post-apocalyptic New York underground setting, the telepathic mutants, their warped worship of a planet-killing bomb, and the generous screen time devoted to the beautiful Linda Harrison as Nova. The character of Nova was one of my earliest onscreen crushes and the fact that I got to see her continued storyline — as well as more time in that primitive, revealing costume — and shockingly hear her speak, sealed the deal for me.

I could go on and on about PLANET OF THE APES, but I’ll keep it brief. Given my appreciation of and minor obsession with Lobby Cards, I’ve assembled a batch from all five original PLANET OF THE APES films below, hailing from a few different countries. Enjoy! 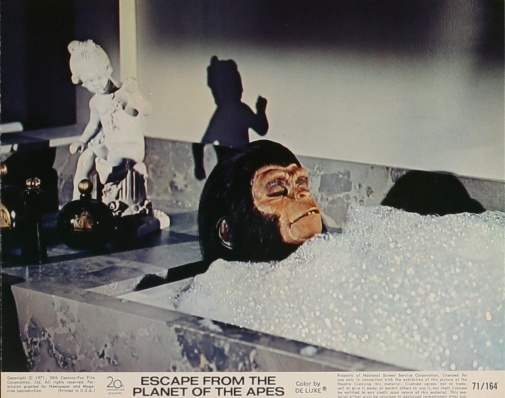 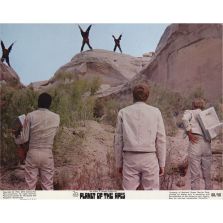 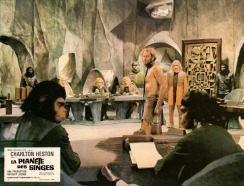 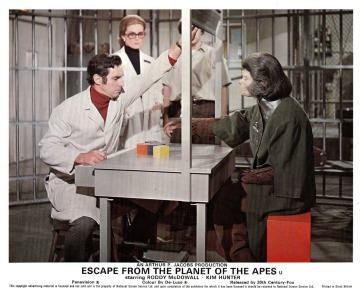 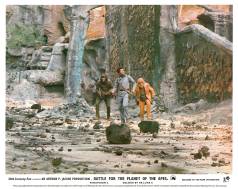 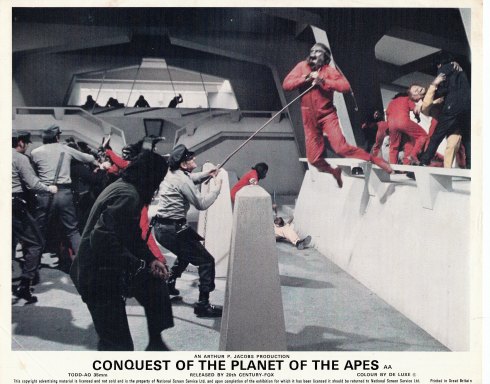 A little background info on lobby cards I like to regularly share for context: Back in the days before the Internet,

movie lobby cards were a powerful tool used by Hollywood studios to lure audiences into the darkened theater. They were the last line of enticement — and sometimes the first — alongside carpet-bombing consumers with coming attractions, movie posters, marquees, publicity stunts, movie program books, and newspaper advertisements for their newest big-screen sensation. With no entertainment websites or blogs available to tease audiences with stills from their films, lobby cards served that purpose for the studio publicity machine. These days, movie theater lobbies have eschewed the traditional lobby card for posters, standees, trailers on repeat, experiential activations and more.