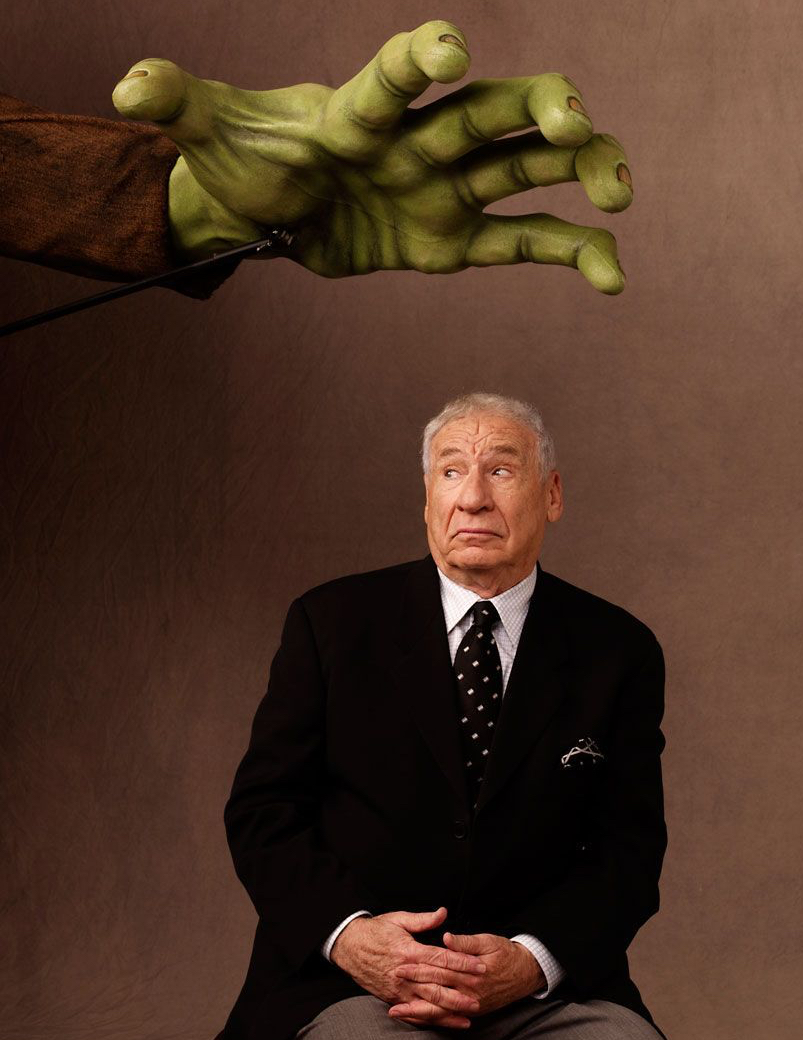 Back in November of 2012, when I was with ENTERTAINMENT TONIGHT, I had the privilege of chatting with the legendary Mel Brooks for the first time. The conversation was in support of his then-new Shout Factory! box set The Incredible Mel Brooks: An Irresistible Collection of Unhinged Comedy.

Then 86 years old, Brooks easily had more energy than the average man half his age, and the Hollywood EGOT legend (a member of the highly exclusive Emmy, Grammy, Oscar and Tony Award winner’s club) enthusiastically regaled stories of his career to me for 45 minutes until his staff gave him the hook. 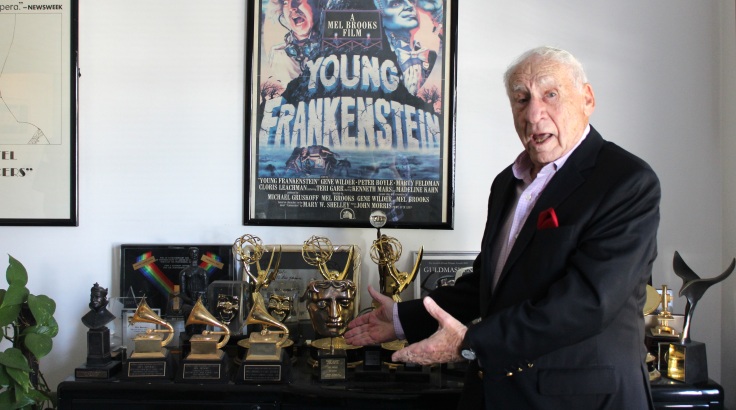 Out of the gate, Mel told me on the phone, “David, you’re going to have to suffer. You’re gonna suffer me eating a cinnamon-raisin bagel as we talk.” But before I could say another word, he turned the tables and interviewed me, asking me a barrage of questions about my life and career. The man wanted to know who he was talking to. He wanted to be able to relate.

I got to tell him that I remember seeing SILENT MOVIE and HIGH ANXIETY in the theater with my parents, and how much those films made me laugh. I told him that I grew up in New York, went to college upstate to study film, and then headed out west to pursue my dreams in the entertainment biz. He responded, mouth full, to each bit of information I shared, and commented, “So this is good. You write for Entertainment Tonight — the blogs, the web, the blah blah blah? I love that. I like it. I watch it. I see it.”

For fans of Brooks, the five-DVD and single CD collection is a veritable treasure trove of all things Brooksian, featuring a five-part documentary in which Mel tells stories about the making of his great films, from BLAZING SADDLES and YOUNG FRANKENSTEIN to ROBIN HOOD: MEN IN TIGHTS. The set is also packed with many of his great vintage TV appearances, including The 2000 Year Old Man with Carl Reiner, Mel Brooks and Dick Cavett Together Again, select moments from The Electric Company and Free to Be You and Me, his Oscar-winning short The Critic; an homage to his great friend and mentor Sid Caesar; and much, much more. 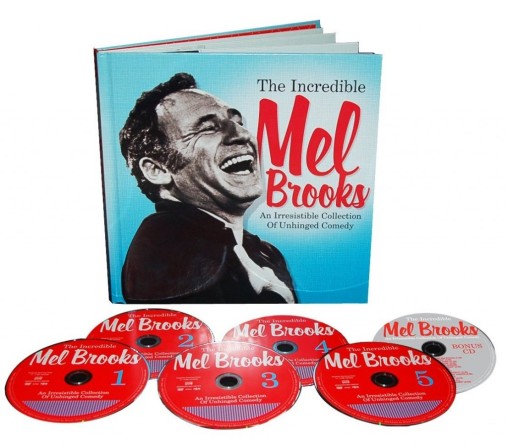 “Strangely enough it’s like a moving memoir,” acknowledged Mel. “When I say moving I don’t mean emotional. I mean actually like a moving picture.”

The Unhinged discs are accompanied by a full-color, 60-page book with essays, notes, memorabilia, family photos and more that opens to a page with Mel’s quote, “Comedy blows the dust off your soul.”

“You know, it says what it is, it is what it says,” explained Mel of that philosophy while munching on his bagel. “There’s this phenomenon, you know, we live and die, a lot of tears, and there’s a lot of despair, and there’s a lot of hopes dashed, and dear people that we love that die. … It makes you realize it’s better to laugh than to cry.”

I first crossed paths with Mel back in 1997 when he and Reiner were promoting The 2000 Year Old Man in the Year 2000: The Album on one of the first AOL live video chats on a site called Entertainment Asylum. I told him this detail, and he mused, “You know, I was way ahead of the curve on many things not even realizing it. I didn’t know about Internet, I didn’t know about the web or who was doing it, I didn’t know about rap, but I was one of the first to do a rap song. In the first DVD that we have in the Mel Brooks box set I do the Hitler Rap — as Hitler I tell the story about how the party came together and gained strength. It was really great, but it was a rap song! It was a crazy rap song.” 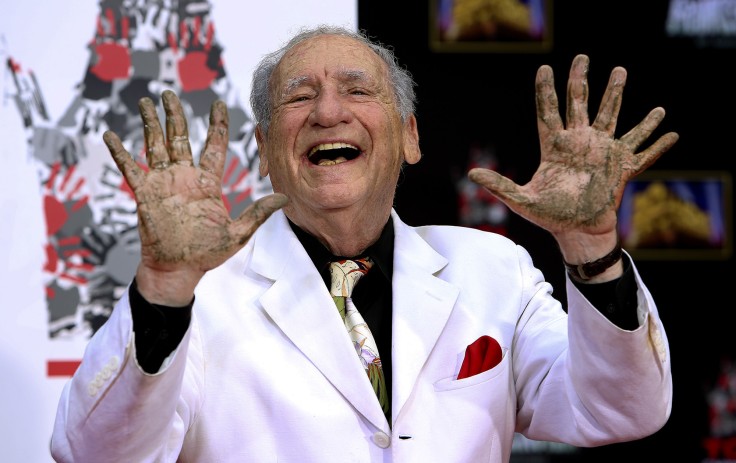 Asked how much of his comedic sensibilities he owes to his family, Mel replied, “I think it’s a great deal — I think my family and my environment, being a street-corner comic in Wiliamsburg and Brooklyn growing up… And it wasn’t easy. Everybody was as good as you were. There was Bernie and Lenny and Irving and Charlie and everybody was good. You took your turn. It was like the Improv on Friday night, you know? … And nobody was a star; every little Jewish kid in Brooklyn was smarter than the other one in terms of street corner comedy.”

Born Melvin Kaminsky, as a youngster Mel’s “big dream” was to be a comedian at Grossinger’s, which was the ultimate resort hotel in the Catskills featuring Borscht Belt entertainment. 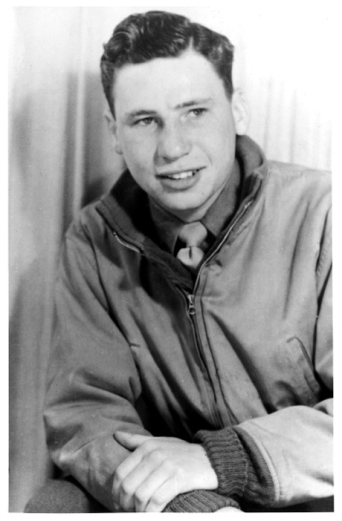 “I was 14 years old, I was playing drums, and I knew I could always make a living playing drums — I could keep time and I was pretty good — but the dream was Grossinger’s,” he beamed. “If I could be there with Jennie Grossinger, with Eddie Fisher, with all these incredible people, it just would’ve been thrilling. I didn’t need any more than that. That’s it. That was my ultimate dream: Good evening ladies and Jews, I met a girl who was so thin, this girl was so skinny I took her to a restaurant, the maître d’ said, ‘Check your umbrella?’ These terrible jokes, I used ’em in SILENT MOVIE. I used every lousy joke I knew.”

His dream came true just a few years later when he was discovered doing stand-up in place of a comedian who fell ill at the last minute (“It was glorious! The Jews stood up at the end and applauded. I mean, that’s never happened in the mountains.”). Ironically, a talent scout asked him to work on the staff at Grossinger’s: “I said, ‘Are you kidding? That’s my dream!'”

Explaining the origins of his unique approach to humor, Mel told me, “Milton Berle stole from everybody. He stole from the best — and I stole from Milton Berle. … Then, later I had an epiphany, a flash, saying, ‘Wait a minute — it’s not jokes, it’s stories. It’s experience. It’s relating something that was actually real, or had happened to you.’ It was relating experiences, and that was the humor. It was life stories, and I knew it when I was 16 or 17. I said, ‘That’s the way to go,’ and it helped me a lot [in my career].”

Mel has always been very open about his immense respect for comedy giant Sid Caesar, whom he worked with closely as a writer on the live, 90-minute variety program Your Show of Shows in the early ’50s. He revealed that he tried to convince Sid to give up his lucrative TV career for film, a much more enduring medium than TV (“The flightiest and the most perishable medium ever created.”). It was somewhat common practice to record over old shows to save costs on tape, and Mel told Sid, “Your work, if you’re lucky, is on Kinescope, the thinnest material ever made to record. Don’t forget that. Whatever you do is going to be forgotten, and you’re going to be forgotten. … I said, ‘When your six weeks is up on this contract [for Your Show of Shows], you’re not going to re-sign. You’re going to say, ‘I’m not going to do television anymore. We’re going to go to Hollywood. We’re going to make movies,’ and whatever you do will not be forgotten. [Sid slept on it] and said, ‘I think you’re right. We’re both wasting our talents on a medium that has no forgiveness.'” 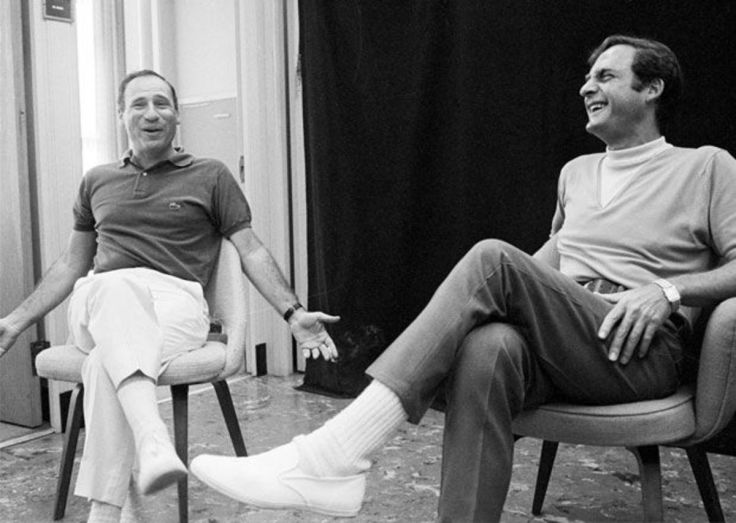 But Sid couldn’t turn down his most lucrative contract yet: “He did four or five more years on that show. The greatest talent in the world, and we have nothing. … [He was a giant] to the masses when he was on, when he was performing Saturday nights, but five or ten years later, they didn’t know his name. … I went to Hollywood and I made movies and I’m indelible and I’m forever and they know my name — and who thought that I would ever be more famous than Sid Caesar? But I am. Not because of my talent, but because of the medium. I knew that’s everlasting glory.”

So how does Mel Brooks ultimately want to be remembered? “I have a tombstone already that says, ‘I told you I was sick!’ That’s the only way I want to be remembered, that they screwed up,” he joked, adding, “I don’t care about being remembered. I really don’t. It’s in your lifetime that you like to have that privilege of going to one of your movies. … It’s thrilling, you know?”

Still incredibly effervescent, will Mel Brooks ever sit in the director’s chair again? “I don’t know. You never know,” he replied optimistically. “I’m thinking maybe BLAZING SADDLES on Broadway is a closer shot, but if I suddenly was mowed down by an idea and I could see the characters, I think I would jump at the chance to make another movie if they gave me French hours – the French start at 12 and end at 9, you know?”

I asked if he had any projects sitting in the top drawer of his desk still waiting to go before the camera, but Mel replied, “No. If I did, I would have made ’em. … Maybe I’ll be struck either by an idea — or a bus. I don’t know. Whatever comes first.” 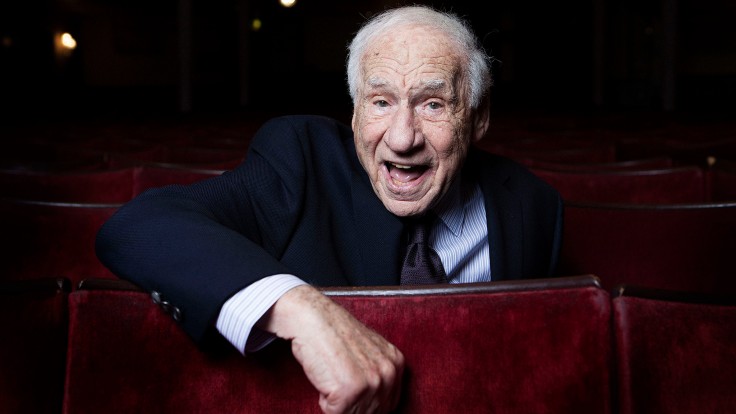 After a very quick 45 minutes, Mel’s staff had to pull the personable legend from the phone to catch another call that was on hold for who knows how long. He told me, “Anyway, Weiner — David Weiner — that’s all you get! If you’re just dying for one more, ask a question and then get out of my life!”

Mel closed the interview with a final quip: “And if you like that wacky new box set, tell a few people. You know, I could use the money.”

Then, check out more of my celebrity and filmmaker interviews HERE.