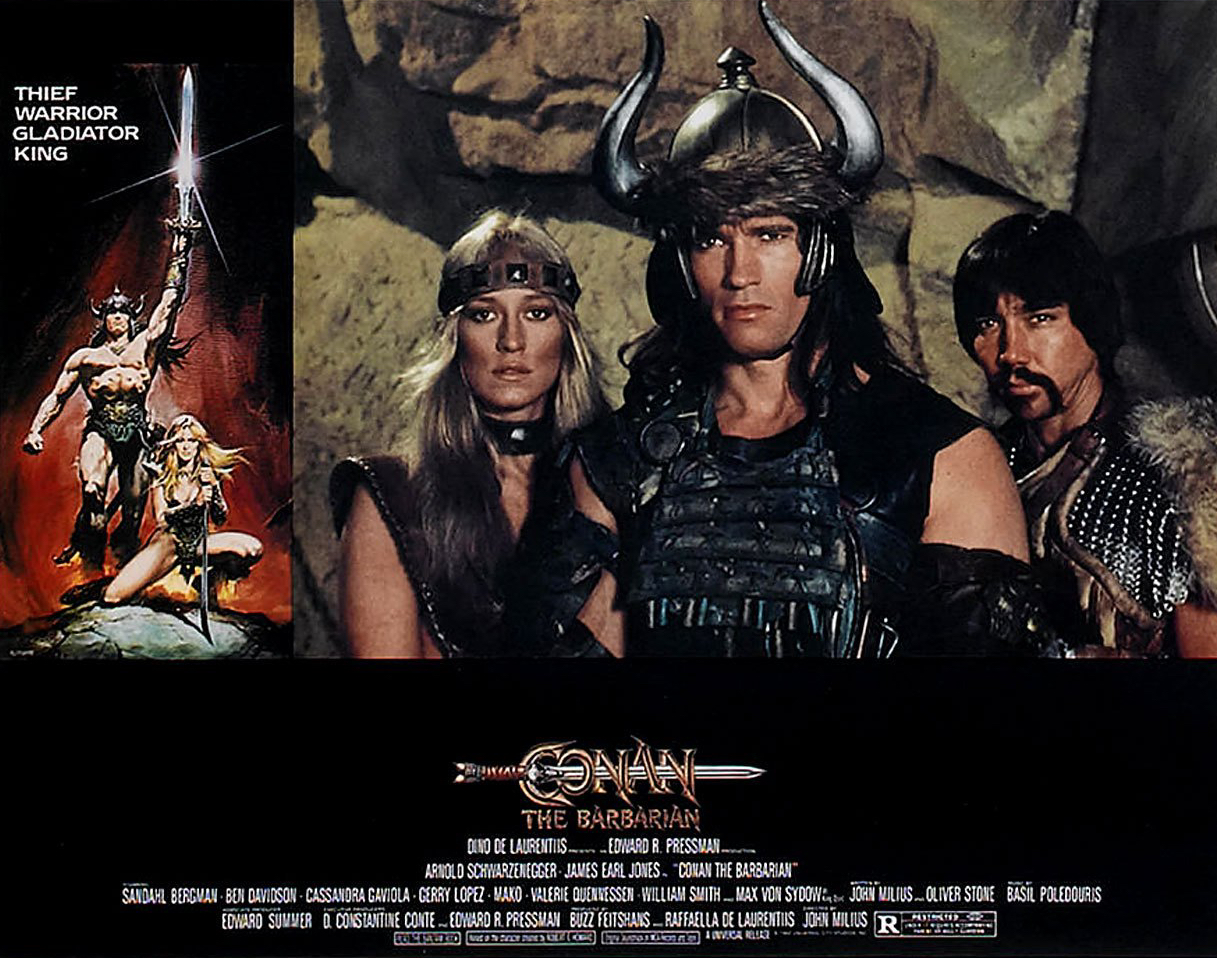 “Conan, what is best in life?”
“To crush your enemies, see them driven before you, and to hear the lamentation of their women!”

CONAN THE BARBARIAN is one of my all-time favorite films. Director John Milius’ 1982 take on the classic Robert E. Howard character starring Arnold Schwarzenegger arrived at the height of my Dungeons & Dragons fervor in the early ’80s, delivering the first solid sword and sorcery fantasy film I could sink my teeth into after John Boorman’s 1981 EXCALIBUR blew my mind.

Co-written by Milius and Oliver Stone, CONAN THE BARBARIAN took itself seriously and handled the material with absolute respect while introducing a dark and dangerous world in the Hyborian Age with one foot firmly planted in the mystic and supernatural. It pulled no punches in its R-rated glory with its images of brutality and unapologetic sexuality, and Schwarzenegger completely embodied the larger-than-life character without all the baggage of his later, post-TERMINATOR one-liner star persona.

The film also benefits from one of the greatest films scores ever written, in my humble opinion, by the late, great Basil Poledouris (RED DAWN, ROBOCOP, STARSHIP TROOPERS), who had worked with Milius on BIG WEDNESDAY. The CONAN score is big, bold and operatic, painting an even larger canvas of imagination beyond the scope of Duke Callaghan’s brilliant cinematography. I still get chills when I put on the soundtrack (which is often) and the percussive horns of that first track, “The Anvil of Crom,” kick in. It’s breathtaking music. 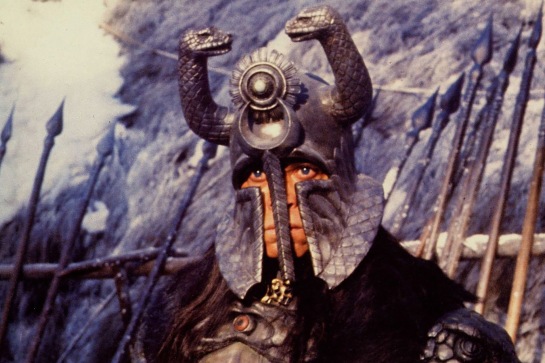 Having been a fan of the CONAN Marvel comics growing up, I ravenously consumed the CONAN THE BARBARIAN Marvel Super Special Movie Adaptation as well. And after I saw the film (several times) I was inspired to design a whole D&D adventure module based on Thulsa Doom’s Snake Cult.

Schwarzenegger starred in a total of two Conan movies. He returned for CONAN THE DESTROYER in 1984, which was fun but much more of a campy lark than a serious follow-up. Directed by Richard Fleischer (20,000 LEAGUES UNDER THE SEA, FANTASTIC VOYAGE, SOYLENT GREEN, RED SONJA), DESTROYER played up the fantasy elements of Howard’s world for thrills and chuckles and featured amusing turns by Grace Jones and Wilt Chamberlain in stunt-casting roles — in a toned-down PG-rated romp — much to the dismay of hardcore Conan fans.

Then the character wielded a sword again in 2011 for a third big-screen appearance with AQUAMAN/GAME OF THRONES star Jason Momoa in the title role. That overly CGI’d outing — which displayed loose ties to the Schwarzenegger series by way of its title, font style, and similar production design — was met with critical disdain and less-than-stellar box-office results.

“I think I was kind of meant for playing Conan, you know?” Schwarzenegger told ENTERTAINMENT TONIGHT back in the early ’80s. “I think that I felt very comfortable playing that character, playing that barbaric role, doing all the sword fighting, and it was a very physical film. This is the great thing about doing films. First of all, you learn new things — sword-fighting or horseback riding and all those things — and at the same time you play like a little child, you can play like cowboy and Indian type of things, you know, looking for the enemy and crushing them and knocking them down.”

In 2012, there was some new industry tub-thumping from Ah-nuld himself that he would return to play the mythic Cimmerian character for one last time in THE LEGEND OF CONAN, which the then-65-year-old star likened to his character’s version of Clint Eastwood’s UNFORGIVEN.

Producer Fredrik Malmberg, who picked up the rights to Robert E. Howard’s character (along with Kull the Conquerer and Solomon Kane and others), said at the time, “The original [CONAN] ended with Arnold on the throne as a seasoned warrior, and this is the take of the film we will make. It’s that Nordic Viking mythic guy who has played the role of king, warrior, soldier and mercenary, and who has bedded more women than anyone, nearing the last cycle of his life. He knows he’ll be going to Valhalla, and wants to go out with a good battle.”

Alas, THE LEGEND OF CONAN still has yet to come to pass, despite valiant efforts to get it mounted on either the big or small screen.

In March of 2019, Schwarzenegger told TheArnoldFans.com about the producer’s struggles to navigate television and Netflix deals that fell apart and other difficulties to produce the film for theatrical: “We have been trying to convince him for years now that the way to go is to come back and hire a really great director and to do another Conan movie and have me play King Conan, when Conan is like 70 years old and he’s disgusted by sitting on the throne and being the king and then something happens after that. It’s really not that far from creating a finished script. The only one who really has to pull the trigger there is the people who own the Conan rights to do a movie.”

While we continue to wait, enjoy these cool CONAN THE BARBARIAN lobby cards from 1982: 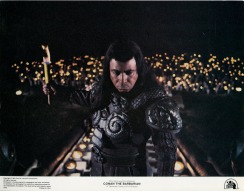 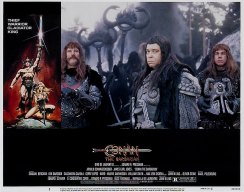 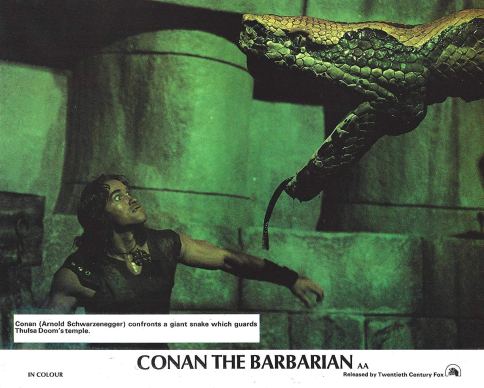 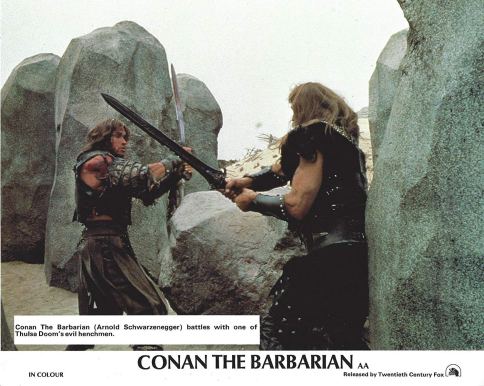 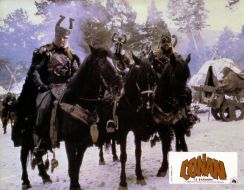 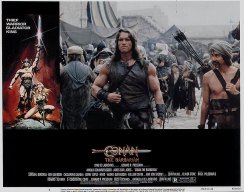 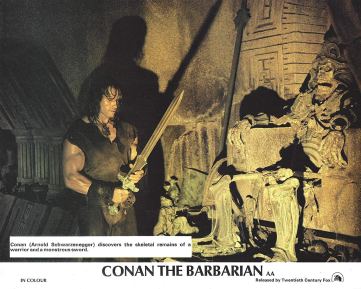 A little background info on lobby cards I like to regularly share for context: Back in the days before the Internet, movie lobby cards were a powerful tool used by Hollywood studios to lure audiences into the darkened theater. They were the last line of enticement — and sometimes the first — alongside carpet-bombing consumers with coming attractions, movie posters, marquees, publicity stunts, movie program books, and newspaper advertisements for their newest big-screen sensation. With no entertainment websites or blogs available to tease audiences with stills from their films, lobby cards served that purpose for the studio publicity machine. These days, movie theater lobbies have eschewed the traditional lobby card for posters, standees, trailers on repeat, experiential activations and more.