I’m very excited, yet cautiously optimistic, about the arrival of BLADE RUNNER 2049. The trailer looks fantastic, I’m overjoyed that Harrison Ford has returned, and I am a fan of ARRIVAL director Denis Villeneuve’s work. Though I remain disappointed that Ridley Scott only produced and did not direct the film, his involvement is crucial to my interest in actually wanting to chart the evolution of Rick Deckard’s character.

And that, of course, brings back the long-debated question about whether or not Deckard is indeed human or Replicant.

Philip K. Dick‘s groundbreaking 1968 novel Do Androids Dream of Electric Sheep? supplied the groundwork for Scott’s iconic 1982 film that starred Ford as a retired Los Angeles detective in 2019 tasked with tracking down a quartet of Replicants — perfect androids indistinguishable from humans — who are illegally on Earth seeking to meet their maker and extend their expiration date.

The somewhat cryptic ending of the original theatrical release left some viewers wondering if Deckard was artificial and did not realize it, just like the Rachel character, played by Sean Young. I never thought he was a Replicant or that the film implied he was, and I was perfectly content to consider him wholly human.

But that changed when I was working at ENTERTAINMENT TONIGHT in 2012 and I uncovered some great interview footage with Scott from 1992 when he had just released his Director’s Cut of the film. “What I thought made sense was that [the] Deckard character could possibly be a Replicant, so that’s gone back in [this version],” he explained. “I think what would be curious to ask about the Harrison Ford character is was he a [Nexus]-7, or was he an 8? … It’s clearly there if you watch even the first version: there’s a clue when he picks up the unicorn at the end, that little piece of origami.” 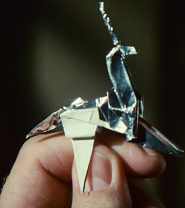 Scott has put the question to rest on many occasions, from junkets to screenings, since that 1992 interview. He gets asked all the time whether or not Deckard is a Replicant. But with so many recuts and versions of BLADE RUNNER made available over the years (at last count, the 5-Disc Complete Collector’s Edition Blu-ray contains five versions of the film including the “definitive” Final Cut), the question of what exactly is canon and what is not has been raised yet again with the arrival of BLADE RUNNER 2049.

Will the film assume everyone thinks Deckard is a Replicant? Will it eschew the arguably revisionist history of the film’s subsequent cuts and keep it as an open-ended question?

If BLADE RUNNER 2049 is a hit — and if Ford has the strength and good health to do it (he is 74 years old, mind you) — there’s the chance that the is he or isn’t he? Replicant question will be strung out for future installments. After all, Scott and the original film’s screenwriter, Hampton Fancher, originally conceived of BLADE RUNNER as the first in a series of films incorporating the themes and characters featured in Dick’s novel.

Perhaps the answer will be clear when BLADE RUNNER 2049 opens in theaters October 6. Until then, like tears in rain, we’ll all just have to fiddle with unicorn origami at a steamy noodle bar.

A side note: One of the perks of living in Los Angeles is the easy access to the landmark Bradbury Building, in my mind the most iconic location from BLADE RUNNER. Built in 1893 (designed by George Wyman, who was Forrest J Ackerman’s grandfather, inspired by Edward Bellamy’s utopian novel Looking Backward), the building has been featured in a number of other films including CHINATOWN, WOLF, and (500) DAYS OF SUMMER. The exquisite attention to detail (in Italian Renaissance Revival Style), striking exterior elevators and bold, overhanging stairways are truly a sight to behold.

Lastly, I assume you are a big fan of BLADE RUNNER? Then check out my interesting ET interview with Sean Young about working with Harrison Ford and Ridley Scott on BLADE RUNNER, plus her DUNE experience, and more HERE. She does not disappoint.

4 thoughts on “To Be or Not To Be a Replicant?”