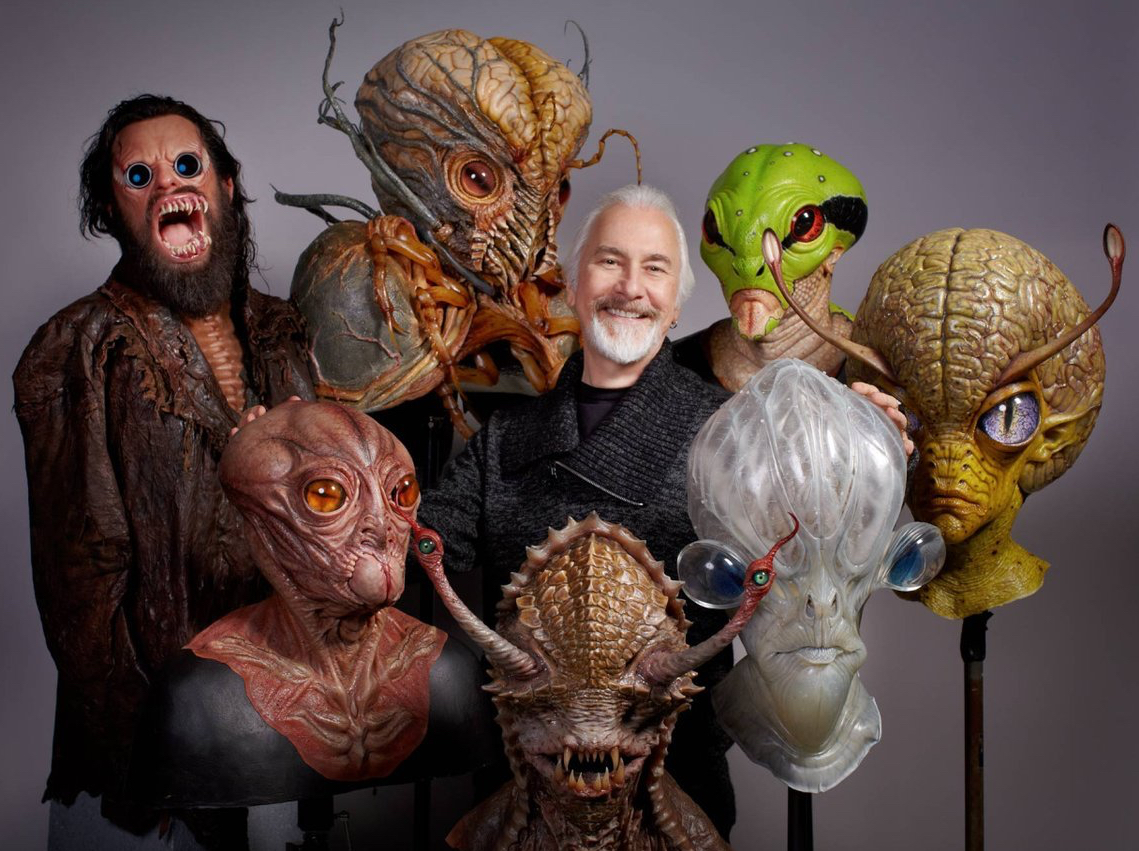 Rick Baker has been on my film geek radar ever since I saw AN AMERICAN WEREWOLF IN LONDON in 1981 and had to learn every last bit of information about how it was made. Through that investigative process when I was 13, I came to realize that I already knew who Baker was, and knew of his other incredible makeup effects work in such films as STAR WARS, KING KONG (1976), and THE INCREDIBLE MELTING MAN, by way of Famous Monsters of Filmland and Starlog magazines.

Through my position as executive editor of Famous Monsters, I had the pleasure of meeting Baker a couple of times and interviewing him extensively about AMERICAN WEREWOLF

(alongside writer/director John Landis and co-stars David Naughton, Jenny Agutter, and Griffin Dunne) on the film’s 25th anniversary for a piece in FM #284 (that was nominated for a Rondo Award for Best Article alongside Rick’s cover painting for the issue, which picked up the Rondo!)

I first spoke to the multiple-Oscar winner about his career at a junket for MEN IN BLACK 3 in 2012 when I was with ENTERTAINMENT TONIGHT. It was a real thrill for me, and Baker was happy to sit down for a good half hour to discuss his humble beginnings, his love for Famous Monsters, and even what he thought AN AMERICAN WEREWOLF IN LONDON would look like if it were made today.

Here is a portion of that one-on-one piece for ET:

“I was part of the first generation of kids that grew up in front of the TV — I was really attracted to the horror films that they’d show on Friday or Saturday nights,” Baker told me. “I was so fascinated by those monsters. … I just thought, ‘That’s what I want to do when I grow up.’ I was like 10 years old, and I just set my mind to it. And I started teaching myself how to do it. There weren’t schools then, and there was very little information then, but I figured it out.”

The surprisingly humble California native has won seven Best Achievement in Makeup Oscars (for such films as AMERICAN WEREWOLF, MEN IN BLACK, ED WOOD, and HOW THE GRINCH STOLE CHRISTMAS) out of a total of 12 nominations, and made the Guinness World Records Book for most Oscar wins and noms in that category. In fact, the category was created by the Motion Picture Academy in honor of Baker’s extraordinary work on AMERICAN WEREWOLF.

“[Landis] wanted basically what he kept saying was a crappy gorilla suit,” said Baker with a laugh. “John called me up out of the blue, drove out to Covina, and went into my little bedroom workshop — I grew up in a very lower-middle class, little teeny bedroom where I made all my stuff — it was full of monsters, and he basically flipped out at the stuff that I had. He said, ‘I’ve seen the stuff that the professional guys are doing, and your stuff is as good as them, and you’re like, how old are you?’ So I did John’s first movie.”

Ten years later Landis had become a name director with such movies as ANIMAL HOUSE and THE BLUES BROTHERS and secured the financing for AMERICAN WEREWOLF. “[Landis] said, ‘I want to do a transformation unlike what’s been done before. It just doesn’t make sense to me that when your body was going to transform like that, that you would sit in a chair like [original WOLF MAN] Lon Chaney, Jr. and be perfectly still until he transformed.’ He goes, ‘I want to show the pain, I want to show what this body is going through, what’s happening, and it’s going to be my next movie and I want you to do it and you’ve got to figure out a way to do it.’ It’s like, okay! … And it’s what really changed things.”

Baker became a pioneer in his field but had to adapt to changing technological times and was not keen on his experience working with Universal Studios executives on their 2010 THE WOLFMAN remake. The industry had evolved, and not for the better. His thoughts on a contemporary AMERICAN WEREWOLF production were also not very optimistic. “If [it] was made in this day and age it would all be CGI,” he said with a hint of resignation. “It’s definitely taken away the animatronic part of my job, even though we did make some animatronic stuff in MEN IN BLACK. … I embrace the technology, but what I don’t like about it is I think it’s just made for sloppy filmmaking. The fix-it-in-post attitude is so prevalent in moviemaking now. It makes people not have to think about things. In AMERICAN WEREWOLF we thought about everything in advance, we planned it out, we made storyboards, so I knew what to make.”

Perhaps Baker’s biggest crowning achievement, even more than winning multiple Academy Awards, was the first time he saw himself in Forry Ackerman’s Famous Monsters of Filmland, the magazine that first got him interested in the craft behind the camera as a young boy. “I really felt like I made it, you know?” said the silver-ponytailed artist with a child-like smile. “I still think that’s the most excited I’ve ever been about any article that’s been written on me, because it was my magazine, and it was the one that I was so fond of.”

Baker’s Star on the Hollywood Walk of Fame is located right next to friend and Oscar-winning Visual Effects icon Dennis Murin’s star, which he finds “really exciting. … [Dennis, visual effects colleague Ken Ralston, and I] were all like these teenage kids that found each other with similar interests and hoped that someday we could work on a movie, and we managed to all work on some pretty amazing movies, you know? … I’ve had so many surreal experiences in my lifetime, pursuing my hobby.”

For MEN IN BLACK 3, Baker said that director Barry Sonnenfeld pretty much gave him free reign to create a rogue’s gallery of aliens and creatures to populate both the foreground and background action. Designing a total of 127 creations gave the artist an opportunity to pay homage to the favorite B-movie baddies of his youth. “You could basically name any film that was done from 1950 to 1970 or beyond that was a science fiction film and we paid some kind of homage to it,” he said. “And a lot of them were films that people wouldn’t even know unless they read Famous Monsters, or grew up in front of the same movies on TV as I did: INVASION OF THE SAUCER MEN, THIS ISLAND EARTH, THE DAY THE EARTH STOOD STILL, INVADERS FROM MARS, OUTER LIMITS, you name it.”

Baker retired from active work in the film industry just three years after our ET interview, and even then he hinted at wanting to wind down and spend more time painting and producing art on his own terms. “I’ve really been having fun; I’m kind of at the point in my career where I only want to work when it’s something I really want to do,” he said.

Since then, Baker has shared much of his creative work on social media — including Twitter and Instagram — featuring amazing paintings, sculpts, models, renderings, and 3D prints of the things he loves the most: Famous Monsters.

Then, read more Famous Monsters-related pieces on IT CAME FROM… — if you dare!